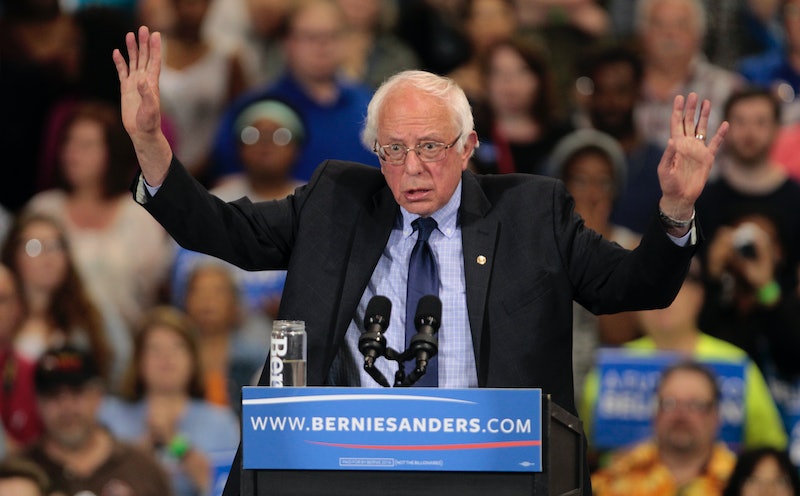 Let's face it: It's basically over for Bernie Sanders. That surely hurts if you're a supporter, but it's the naked truth right now. Democratic presidential frontrunner Hillary Clinton's durable lead in pledged delegates, which has stayed at more than 200 for weeks and now tops 300, was never in serious doubt. Even in the midst of Sanders' brief run of consecutive state wins throughout late March and early April, the comeback odds were remote at best. And now, after another round of stinging defeats, you might be wondering: When will Bernie Sanders drop out of the 2016 presidential race?

As Sanders has faded from contention for the Democratic nomination, he's increasingly faced questions about whether he'll bow out of the race, clearing the way for Clinton to start her general election campaign in earnest. Thus far, the answer has been resounding clear: not now, and certainly not until all the votes have been cast. In fact, Sanders, and senior officials within his campaign, have repeatedly stressed that he intends to take the race all the way to the Democratic National Convention — which might induce a little heartburn on the part of Clinton and her supporters. "Really?" you can almost hear them say, "All the way to the convention?"

The answer may well be yes. Obviously, it's easier to defer these decisions to the future when you've got a credible route to winning the nomination, and Sanders simply doesn't anymore. As The New York Times' Nate Cohn noted on Tuesday night, he'd have to win all of the remaining primaries by 30 points to turn things around, which seems utterly beyond any realm of possibility.

But that doesn't mean Sanders doesn't still have some objectives and plans going forward. Perhaps most importantly, he wants his coalition to have its time in the sun at the convention and use his accrued political capital to try to push the Democratic platform to the left. At least, that's what he alluded to in his statement congratulating Clinton on her victories on Tuesday night ― he specifically referenced "[fighting] for a progressive party platform," and gave some examples of what he wants to see.

The people in every state in this country should have the right to determine who they want as president and what the agenda of the Democratic Party should be. That’s why we are in this race until the last vote is cast. That is why this campaign is going to the Democratic National Convention in Philadelphia with as many delegates as possible to fight for a progressive party platform that calls for a $15 an hour minimum wage, an end to our disastrous trade policies, a Medicare-for-all health care system, breaking up Wall Street financial institutions, ending fracking in our country, making public colleges and universities tuition free, and passing a carbon tax so we can effectively address the planetary crisis of climate change.

In other words, Sanders is not going anywhere until every single person who wants to vote for him has the opportunity to, because he's not just fighting for the nomination (really, not at all anymore). Rather, he's fighting to seed his progressive ideals into the very fabric of the Democratic Party, perhaps as a way to make sure Clinton is held to the left during and after the general election, rather than drift rightward for a broader appeal. It might be sad to consider if you've been a die-hard Sanders supporter, sure, but you can at least take some solace in knowing that he's left his mark on the presidential race, and he's not quite done just yet.