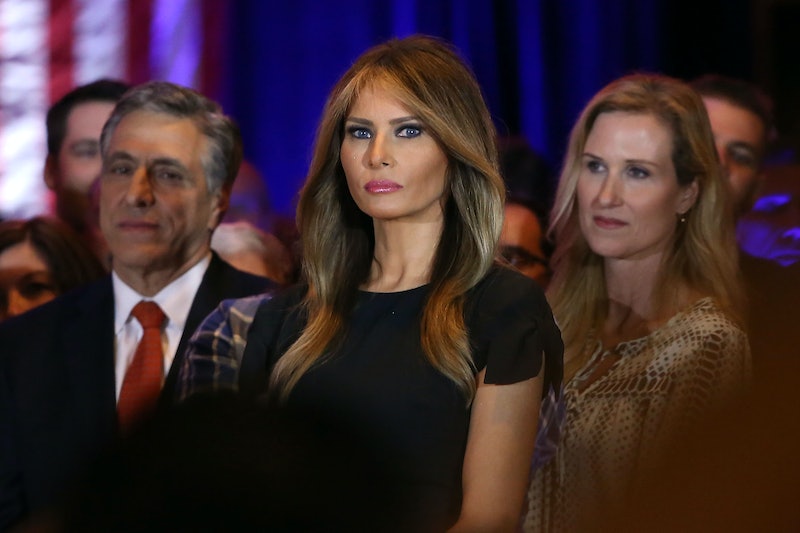 Hours after her husband's crushing wins in Tuesday's primaries, GQ published a deep-dive profile of Melania Trump. I read and learned more about Trump in the piece, and there were moments when I couldn't help but cringe — and, apparently, so did much of the internet. But at every reflexive thought I had of "Oh, no, Melania! This is bad for women!" I encountered another negative, shaming takedown of her — and it reminded me Melania should say and do whatever she pleases without being boxed into a "First Lady" role.

Granted, Melania Trump said and did a lot in the profile that might make readers, especially feminist ones, shudder.

Trump brazenly denied she's had Botox or breast implants (and sniffed at those who have). As Julia Ioffe wrote in the GQ profile:

Melania scoffs when I ask if she had had a breast augmentation. "I didn't make any changes," she says. "A lot of people say I am using all the procedures for my face. I didn't do anything. I live a healthy life, I take care of my skin and my body. I'm against Botox, I'm against injections; I think it's damaging your face, damaging your nerves. It's all me. I will age gracefully, as my mom does."

Melania also proudly said that her husband is just like her father:

Far from objecting to the comparison that's made between her husband and her father, Melania agrees they're a lot alike. "They're both hardworking," she says. "They're both very smart and very capable. They grew up in totally different environments, but they have the same values, they have the same tradition. I myself am similar to my husband. Do you understand what I mean?'"

As one might have anticipated, the Internet's response to the profile thus far displays a collective latching on to these more tabloid-y points.

And so forth. It's only been a few hours, so it's safe to say we can expect lots more of this. And while it's fine to disagree with what Melania Trump is saying, and fine to dislike her, slamming her as vain/slutty/hypocritical forgets one very important fact, which is that Melania Trump gets to be whatever damn kind of woman she wants to be.

Is she doing much for women's equality? I would say no, not particularly. But is demanding snarkily on the internet that she behave as a different kind of woman, the one we want her to be, the one she is not, also doing much for women's equality? Definitely no. I know it sounds trite, but there are all kinds of women, and every one of them should get to be whomever they want to be.

This isn't the first time we've mocked/trashed Melania Trump. There was the whole naked-in-GQ, vote-for-Cruz-to-avoid-this-harlotry scandal. During the Utah primary, an anti-Trump Super PAC released an ad showing Melania posing nude saying "Meet Melania, Your Next First Lady" with "Or You Could Vote For Cruz" at the bottom. Yeah, it slut-shaming to the max.

She has, of course, knowingly and willingly signed on to extra public scrutiny by being married to the Donald — especially now — but that doesn't change the fact that she doesn't owe it to us to conform into whomever we think she should be. That narrative is just another way of controlling women, no more feminist or fair than Melania smugly declaring that her husband is very tolerant of her because she's not a nag ("'He is a very understanding husband," Melania once told an interviewer. "If I say, 'I need an hour, I'm going to take a bath,' or I'm having a massage, he doesn't have nothing against it. He's very supportive in that way." She lets him have his space; she's not "needy" or "nagging," as she tells me").

"Nobody controls me," Trump told Ioffe at one point during her interview. She was referring to her husband, but that includes us, too.