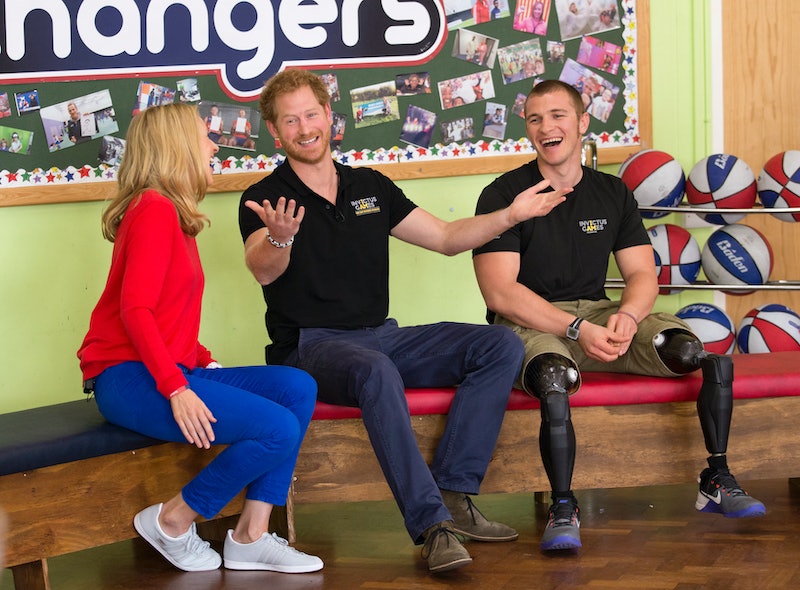 Prince Harry becoming the next king of England will probably never happen. That is a sad fact his biggest fans and supporters have come to accept (well, most of them, anyways). Now that Prince William and Princess Kate are parents to two children, Prince George and Princess Charlotte, that puts Harry as the fifth person in line for the British throne, behind his father, Prince Charles, Prince William, and the two kids. So, the likelihood of him becoming the country's next leader is very slim, which is something that's upsetting one little boy who really wants Prince Harry to be king.

While adding to his extremely long list of good deeds (anyone else find Harry's philanthropic duties attractive?) by filming a special episode of Game Changers , a Sky Sports series inspiring young kids to get active, have fun, and learn new skills through sports, a 9-year-old boy named Tristan asked Prince Harry, "Are you ever going to be king?" Like the good guy he is, Harry laughed and then broke the little boy's heart by answering, "That's the question everybody wanted — let's be honest. You'll be glad to know, probably not!"

Harry then looked over at Tristan, who was clearly crushed by the royal's response. "Oh, look at the disappointment!" Harry said. "I love that. I'm going to give you a high five." And that's exactly what he did. Yes, it's all adorable as it sounds. Also, Tristan is basically every Prince Harry fan who would love to see him be king one day.

Tristan didn't stop there in expressing why he so desperately wants Harry to be the next leader of England. Per The Telegraph, Tristan said, "I just want Prince Harry to do what he wants, what he really, really wants. I think it would be a fun experience for him to be king. I would love to see him be king."

OK, Tristan, you are my new favorite person. Clearly, Harry has great influence over many young individuals, which is fantastic. He gives back in amazing ways and is constantly inspiring kids of all ages to be kind, follow their dreams, and to be great one day. Why wouldn't Tristan and others want him to be an even more powerful leader than he already is?

Even though that probably will never happen, there's no doubt Harry will continue to shine as a prince. Plus, who needs the title of king, when he's already so influential? I think it's safe to say Harry agrees with me.

More like this
What We Know About Lilibet Diana's Godparents
By Frances Stewart
Meghan Markle Brought Flowers & Donations To The Uvalde, Texas Shooting Memorial
By Grace Wehniainen
Prince Harry Spoke Out About Archie & Lilibet’s Futures And What Worries Him The Most
By Sam Ramsden
The Grey's Anatomy Season 18 Finale Finally Revealed If Japril Got Back Together
By Brad Witter
Get Even More From Bustle — Sign Up For The Newsletter