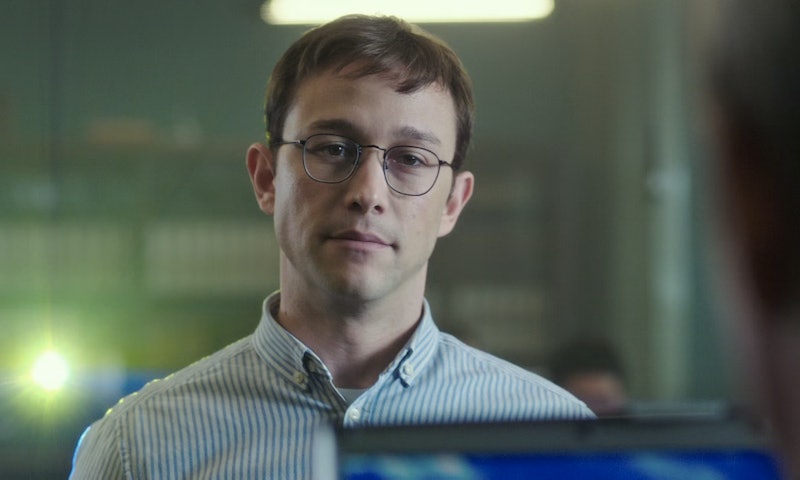 In a trend which is so typical of the Internet, the first trailer for Joseph Gordon-Levitt's new film Snowden was released on Wednesday and seemed to immediately become a trending topic on social media. While you might imagine that movie fans would be talking about the politically charged storyline of the movie which focuses on the untold story of NSA-exposer Edward Snowden, that's actually not been the case. The Internet is talking about one thing and one thing only: What is going on with Joseph Gordon-Levitt's voice?

Sounding indisputably deeper and very unlike the Gordon-Levitt we have come to know and love over the past few decades of his career, Snowden appears to have inspired the actor to directly mimic the vocal tone and cadences of Snowden, and fans are divided over whether he's nailed it or failed it.

Snowden's voice, which has become increasingly familiar due to the amount of talks and interviews the polarizing political figure has given since the controversy, has never sounded particularly distinctive to the level where it could warrant such an impression but you have to admire Gordon-Levitt's commitment to the role.

Regardless, the Internet has been awash with jokes and criticism surrounding Gordon-Levitt's artistic decision with Twitter going a little into overdrive with reactions to it. With some fans appearing to think that the actor sounds like he's maybe trying a little bit too hard to embody the character and that his distinctive vocal acting in the role is more distracting than immersive, others have noted that his voice doesn't feel quite authentic or that it has an unfortunate shlocky quality to it which detracts from the subject matter. There have, of course, also been more than a few comparisons to iconic deep voiced movie characters throughout movie history.

Thankfully, there's also what appears to be an equal amount of people who are bringing some much-needed balance to the debate by providing the complete opposite opinion:

When you listen to Snowden's actual voice during any one of his interviews, you can clearly hear that Gordon-Levitt has picked up on some very specific distinctions of his voice and speaking style and emulated them pretty closely.

We'll just have to wait until Snowden is released in cinemas on September 16, 2016 to see whether Gordon-Levitt's managed to achieve the complete package. Until then, watch the trailer for Snowden below and decide for yourself whether you think Gordon-Levitt has nailed his Snowden performance.