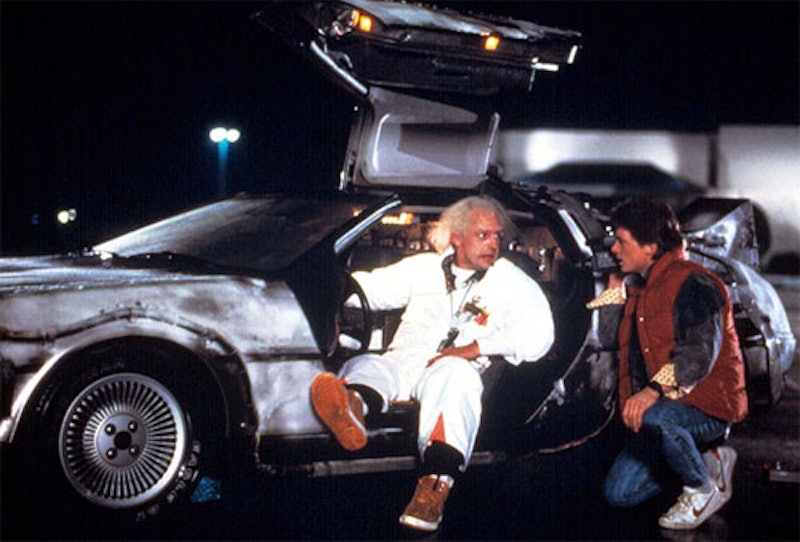 Long before I could legally drive in the late '90s, I spent far too much time imagining what car I'd crawl behind the wheel of when I finally earned my independence (also known as a driver's license). And while some of these cars were relatively attainable in that they were real, I devoted equal daydreaming to fictional cars all '90s kids wanted to drive. There were dream cars, you see, and then there were the cars of your dreams — the ones that only lived onscreen, on the page, or, you know, in our heads.

Fortunately for '90s kids, we had no shortage of sci-fi vehicles from movies, TV, and video games to fuel our fancies. In addition to all of those introduced during our favorite decade, there were also some fantastical fictional cars from the '80s we were still crushin' on and, really, who could blame us? I'm not even sure there exists a person born after 1985 who didn't dream of one day breaking the speed limit and/or space-time continuum in a DeLorean.

Today, I drive a nice, normal, adult-like GMC Acadia but — no offense to her — I still harbor visions of slipping into the driver's seat of one of these '90s cars dreams are made of.

While I'm sure there are 1964 Aston Marton DB5's in existence, this wasn't just any Aston Marton DB5 — it was modified to meet the needs of the world's most iconic secret agent, James Bond. Bulletproof glass? Check. Tire-shredding hubcaps? Check. A set that ejected unwanted passengers? Check and yes, please! While it was first introduced in 1964's Goldfinger, '90s kids developed their healthy obsession with it through GoldenEye in 1995 and Tomorrow Never Dies in 1997.

In the late '90s, along came a car that ticked off all the boxes of my nerdy heart: it flew, it was a perfect shade of pale blue and, oh yeah, it came by way of the 1998 tome of our times, Harry Potter and the Chamber of Secrets by J.K. Rowling. The fact that this car could get me to Hogwarts in a pinch would have made it the greatest graduation present on the planet had I gotten it. Thanks for nothing, Mom and Dad. (Just kidding, I totally love you anyway).

I don't care how idiotic a fur-laden truck that looks like a sheepdog is, I wanted the hell out of one after watching Dumb and Dumber for the first time. Who wouldn't want a car they could pet? I bet it would be therapeutic. Besides, the leg hatch that lifted so you could fill 'er up with gas was funny AF.

It's not that Mario's bright red Kart from Super Mario Kart, Mario Kart 64, etc. was particularly flashy. It wasn't. You know what it was, though? A vehicle I wanted because it could turn invisible, whiz by at the speed of light with a mere mushroom, chuck out banana peels to deter foes, and shoot turtle shells at will. Ah, who am I kidding? I still wish I could hurl turtle shells at passing cars sometimes.

The DeLorean DMC-12 was a real car created to be sold on the commercial market, but I wasn't interested in that DeLorean. Even though it had the trademark gull-wing doors which were undeniably rad, it couldn't travel through time like the one Back to the Future's Marty McFly and the Doc Brown zipped through space (and our imagination) in with a blaze of time-traveling glory. (And yes, I know the first two films came out in the '80s, but the third one was released in 1990. So there.)

Thanks to Batman in 1989, Batman Returns in 1992, and Batman Forever in 1995, '90s kids grew up harboring irrational fantasies about one day either owning their own Tim Burton-style Batmobile or being rescued by Batman himself and carted to safety in this winged-badass-mobile. Granted, neither ever happened for me but, hey, there's still time, right?

Yes, I realize this car was actually in production and available for purchase, namely in the late '70s. However, I highly doubt the AMC Pacer's being hawked at car lots back then were powder blue, sported a fun flame decal on the side, and spouted red vines candy from a specialized compartment above the front seat. That's right — I'm talking about the Pacer from the 1992 cult favorite, Wayne's World. What is your life if you didn't want this bad boy at some point?

While KITT wasn't a '90s car, per se, Michael Knight's sci-fi Pontiac Trans-Am was introduced in the '90s and never really faded out of fashion for '90s kids, who grew up watching this artificially intelligent car with our dads. How is this not a thing by now? I need a car to do the heavy lifting so I can sleep during road trips.

I could not — I repeat, could not — be more excited for the new Ghostbusters reboot, and not just because I'm obsessed with its leading ladies. I'm also stoked for a new generation to get their own Ecto-1 to covet. I kid you not; I wanted this classic crime-fighting car so much growing up that I tried to convince my mom to let me convert a used hearse. Hint: she didn't go for it.

More like this
Hayden Panettiere Will Return For 'Scream 6': "We F*cking Won, Scream Fam"
By Jack Irvin and Jake Viswanath
Meet The Disney Imagineer Bringing 'Guardians Of The Galaxy' To Epcot
By Charlie Mock
David Schwimmer Doesn't Remember This Classic 'Friends' Episode
By Sam Ramsden
5 Mini Skirt Outfits To Wear, Inspired By These Brave Souls
By Avery Matera
Get Even More From Bustle — Sign Up For The Newsletter