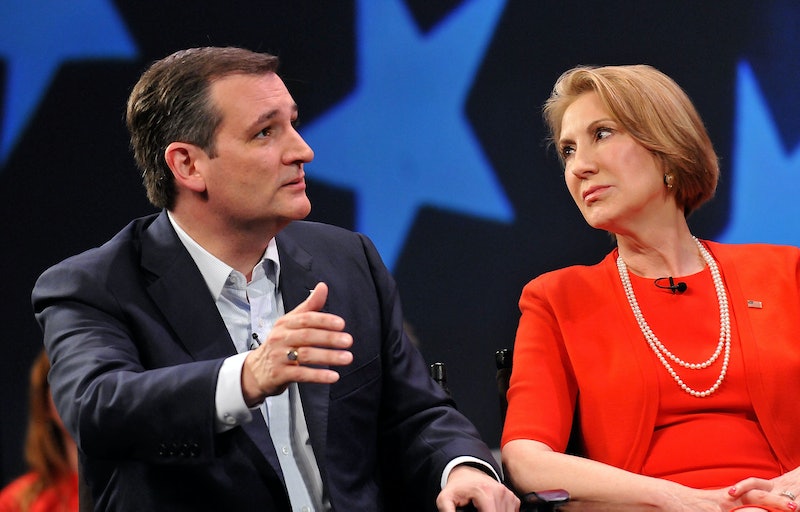 If you've been sleeping on the internet's favorite election conspiracy theory, it's time to #WakeUpSheeple. After all, new evidence uncovered via Twitter after Ted Cruz picked Carly Fiorina as his presumptive VP might finally offer all the proof needed to confirm that the Texas senator is, in fact, the Zodiac Killer. (Yes, that Zodiac Killer — the still-unidentified serial murderer who terrorized the San Francisco Bay area in the late-1960s and inspired a very not-good movie starring Jake Gyllenhaal.) It sounds crazy and you may not be a #TrueBeliever just yet, but give it time...

Now, suppose you line up all the dates, facts, documents and alibis: You might conclude that Cruz was born Dec. 22, 1970 — a year after the Zodiac Killer ’s last (confirmed) kill in December 1969. You might conclude that bar having access to a time machine (which no one is ruling out) the theory is impossible. You might be wondering why and how people are still sharing side-by-side mugshot comparisons of the politician and an artist's rendering of the Zodiac with such conviction despite all the evidence to the contrary. But here's the cherry on top of the Zodiac Killer-Ted Cruz conspiracy sundae: FiveThirtyEight's Nate Silver shared the latest clue on Twitter on Wednesday that might've cracked the case once and for all, realizing that the candidates names anagrammed together are very telling...

Really, though, "Ted Cruz" and "Carly Fiorina" spelling "Fairly Current Zodiac," a coincidence? I think not!

If you ask the horde of Twitter comedians who have made this viral joke (yes, *sigh* they know it's a joke, obviously) into a cultural moment about all the holes in this theory, they probably wouldn't care. I know I, certainly, wouldn't. Even though the joke has been used to raise some money for reproductive justice charities in Cruz's abortion restrictions-ravaged home state of Texas — an amazing IRL bonus to an already amazing cyber moment — the "Ted Cruz is the Zodiac Killer" theory, like most great internet art was born out of a very simple mission: To inspire joy.

Or more specifically: To force Cruz (noted creepy dude) to say the words "I am not the Zodiac Killer" in some public setting.