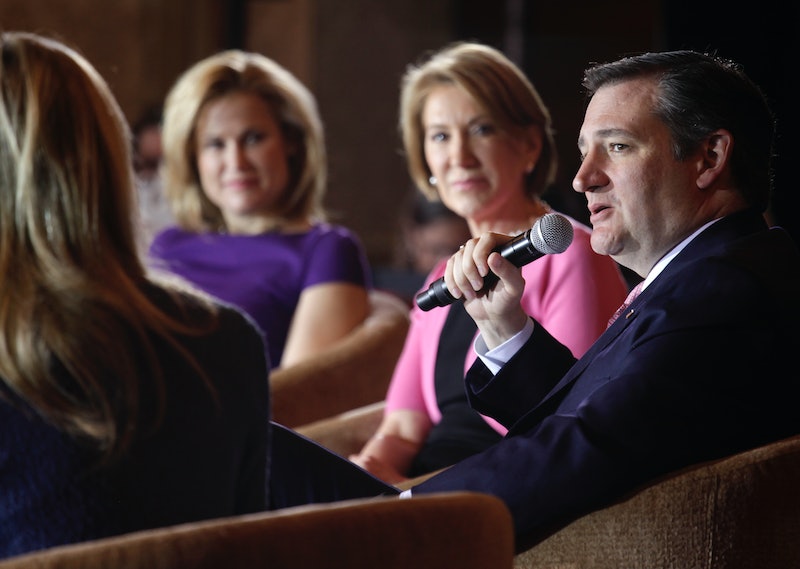 On Wednesday, after crushing losses in April 26's five state primaries, Sen. Ted Cruz pulled out a wild card: He announced his vice presidential pick, Carly Fiorina. There has been no shortage of speculation concerning who the various candidates might select for the number two spot, but Cruz is the first in 2016 to actually make a choice. Has a candidate ever selected a VP pick before securing the nomination?

Yes, but only once, and that was former president Ronald Reagan in 1976, according to Vox. (History Today reported that, until 1940, members of the electoral college or party leaders elected vice presidential candidates.) Even in Reagan's case, he didn't make the announcement until a few weeks before the Republican National Convention that year, and after all primary votes had been cast. In 2016, the convention, where nominees are officially announced, will be in July.

Reagan didn't end up being the Republican Party's nominee in 1976. It's one of the only times that a clear nominee was not established in the primaries, and the contest was ultimately decided by delegates at the convention.

So why the weird move on Cruz's part? According to his statement at a campaign rally, he arrived at his VP decision "[a]fter a great deal of consideration and prayer," reported CNN. Cruz could use a miracle after coming out of Tuesday's primaries with only three delegates. That's because Donald Trump, the Republican frontrunner, swept the five state primaries that day, making it more likely that he'll earn the 1,237 delegates needed to guarantee him the nomination.

Cruz, along with Gov. John Kasich, have been setting their hopes on a brokered convention, which would be their only chances at the nomination after it became mathematically impossible for them to win enough delegates through the primaries. And this could be his last-ditch effort to make himself the most appealing candidate if that scenario did play out.

Fiorina could help Cruz win over delegates in a few ways. First, if she helps him win some last-minute delegates in the big state of California on June 7, he would have a stronger second-place finish, something that could make delegates consider him more seriously. Fiorina was on the Republican ticket for the Senate in 2010 (she ultimately lost out to Democratic incumbent Barbara Boxer), but that doesn't guarantee her popularity in the state in 2016.

Then there's the fact that Fiorina is a woman. The Republican Party might do well to feature a woman on the ticket in the November election if Sec. Hillary Clinton is the Democratic nominee. Finally, Fiorina is a political outsider. She's never actually held office, which could be enticing to Republican voters, at least if Trump's success is any indicator.

Cruz's unprecedentedly early vice presidential pick is yet another bizarre turn of events in this strange 2016 primary season. Time will tell if it matters at all.