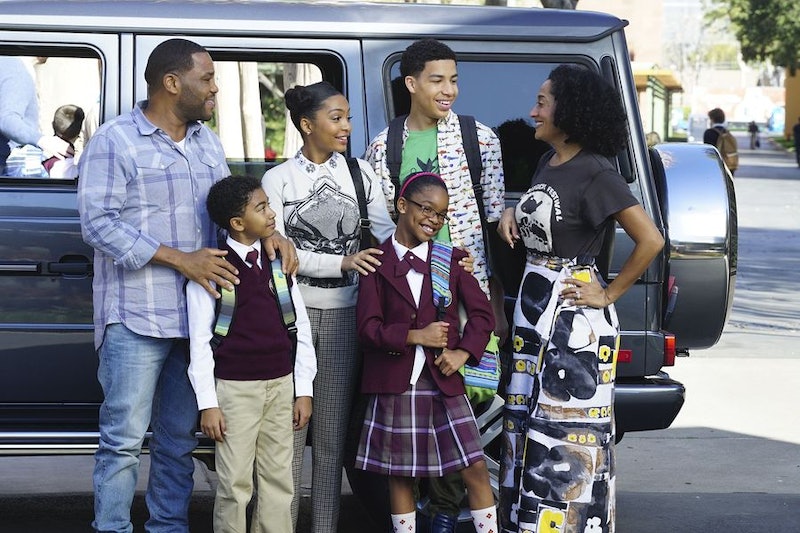 One of the things that makes the Johnson family unique is that the black-ish clan is upper middle class, but surrounded by reminders that both Dre and Bow are the first people in their family history to be quite so wealthy and successful — and according to Dre's opening voiceover, it was The Cosby Show that originally inspired him. So when Dre finds out that his company may be downsizing, he immediately worries about losing what he fought so hard to gain. With his anxieties swirling in his mind, Dre opens up to his father about how much pressure he feels to project the image of success because "when one black person fails, it feels like it sets us all back."

And while I can totally see how he might feel that way, it also feels like a stand-in for how showrunner Kenya Barris must feel about maintaining his series' popularity. It’s simultaneously a tribute to the people (and TV series) that raised the character and a examination of how the pressure both Dre puts on himself to succeed probably isn't healthy.

While Dre might be a bit of a fool, he’s still a devoted patriarch, and it’s important to him to make sure that his kids don’t have to go through what he went through. But when his parents encourage their granchildren to steal the gift cards out of Bow's charity baskets, Dre is furious not just because it's a bad thing to do, but because he doesn't want the (mostly) white other parents to think of his black family as anything less than perfect, represented by the shady and perfect mom Brittany Daniel, who you may remember from The Game.

In the end, Dre realizes that his real life is preferable to any fictional version of perfection. Of course, it's a little odd, because the Johnsons are also a fictional family. But taking this episode, once again, as a metaphor for black-ish, this feels like the show embracing that its characters might be messy, imperfect, and weird. And, speaking of which — in the last seconds of the episode, Charlie returns! If there's any character that represents embracing imperfections, it's him.

More like this
The Best 'Grey's Anatomy' Intern Moments, From MAGIC to Glasses
By Grace Wehniainen
24 Years Ago, 'Friends' Dropped Its Most Underrated Ross & Rachel Episode
By Grace Wehniainen
Netflix Reveals First Look At Wednesday In The 'Addams Family' Spinoff Series
By Bustle Editors
10 Stranger Things-Inspired Halloween Costumes For True Fans
By Emma Carey
Get Even More From Bustle — Sign Up For The Newsletter