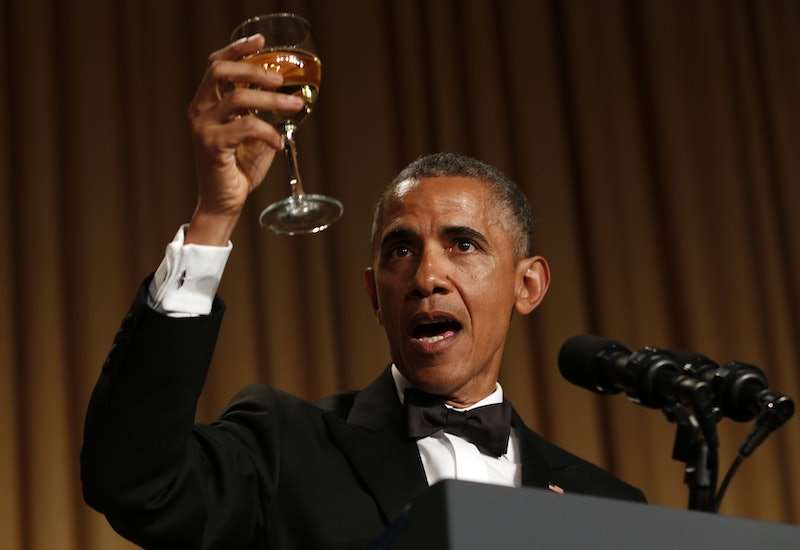 This weekend, Hollywood, media, and politics combine for the White House Correspondents' Dinner in Washington D.C. Among all the press, politicians, and celebrity guests, I think sometimes people forget about one other major aspect of the event: It's a dinner. So what do guests eat at the White House Correspondents' Dinner exactly? According to C-SPAN, Washington Hilton executive chef Andre Cote is the head honcho in charge of the menu — but he can't reveal what's on it until the event's more than 2,600 guests dig in on Saturday night.

"It's an opportunity to really prepare unusual foods for a large amount of people," Cote said in an interview with C-SPAN. "We can't go over this year's menu, but once we do a taste test with the White House Correspondents' Dinner, then our decisions are made that evening and our work begins for the following year." And this year's dinner just might be extra special, since it'll be President Barack Obama's final WHCD. Here's hoping this year's host Larry Wilmore will give viewers some clues about the delicious dishes on all the tables, in addition to roasting politics and the 2016 presidential election.

While the exact menu has yet to be revealed, here's what is known about the good eats at the 2016 White House Correspondents' Dinner.

In the C-SPAN interview, Cote said he does a taste test around three months before the WHCD occurs and that's when the secret menu is formed.

Where The Food Comes From

Right after the taste test decisions are made, Cote orders the food from certain places in California and Florida, he told C-SPAN.

Cote cooks in the Washington Hilton's 23,000-square foot kitchen, which is DC's largest, reported C-SPAN. But even with all that space, there are enough cooks (and celebrities) to fill it up.

"It gets very crowded," the chef said. "We have many celebrities who walk through the back of the house. At the same time, we have so many cooks and people working that evening...You're looking at roughly 400 people that are here to assist on that evening."

Cote told C-SPAN that he runs around so much during the evening of the dinner that he amasses many steps on his tracker. "24,000 steps that day, because I'm all over the place," he said. "Whether it be in the pastry shop, butcher shop, garde manger [preparation of cold food], working on hors d'oeuvres, and making sure the secret service is OK, making sure we're ready for them to inspect our kitchen."

While going to the actual White House Correspondents' Dinner is the hottest ticket in DC, there are also surrounding parties going on all weekend to celebrate the capital's "Nerd Prom" tradition, according to Roll Call. So even if you can't get into the WHCD and indulge in its exclusive eats, there's always the National Press Club Watch Party, the Podwall Party at The Sheppard (featuring craft cocktails and Glee star Matthew Morrison), and The Renwick's Google, HBO, and Smithsonian party with special guest Bryan Cranston. Or if you're just watching the festivities on TV from the comfort of your own home, there's always pizza.