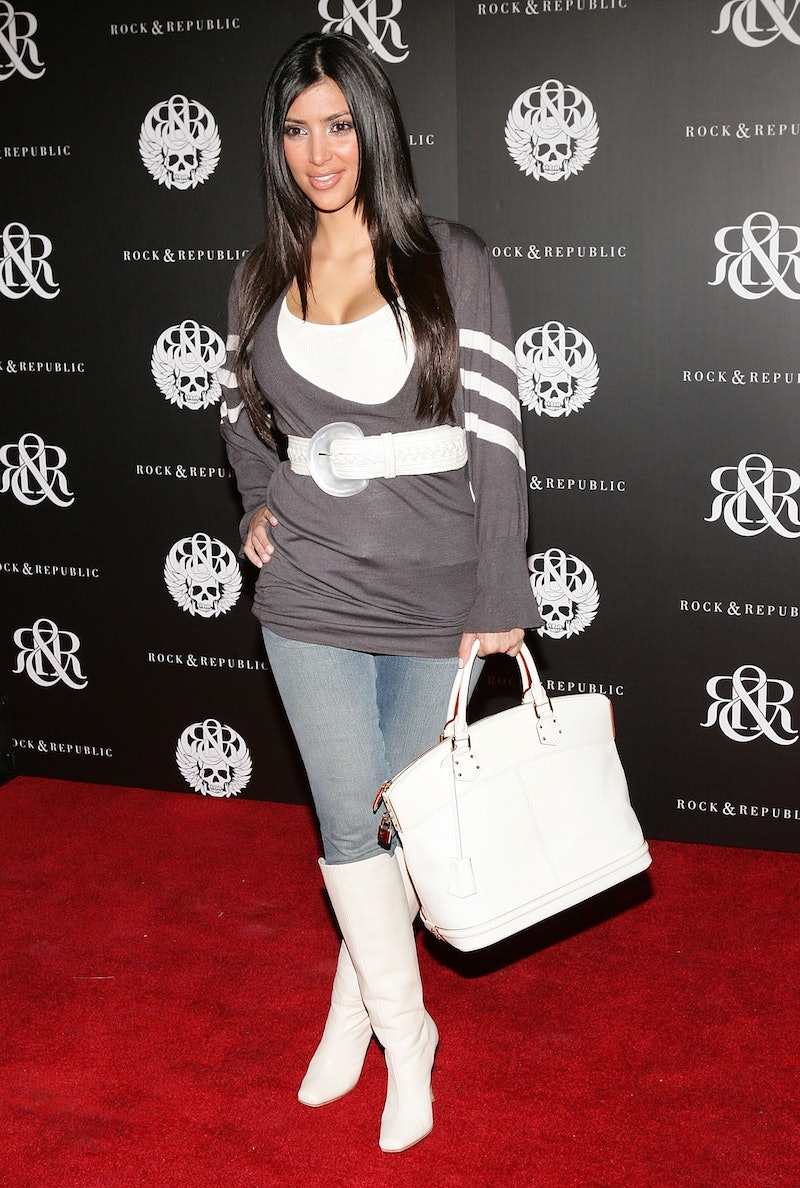 We thought we were killing the fashion game with the platform shoes and crop tops of the '90s — until we truly outdid ourselves at the start of the new millennium. Gone were the days of plaid on plaid and chokers. Instead, we had layered polos and so many belts every cool girl owned in the 2000s. Velour track suits, bedazzled jeans, and trucker hats had their moment in the spotlight. An oversized belt, however, always stole the show! As the go-to accessory to complete any ensemble, the early 2000s belt trend dominated the decade.

Everyone and their mama was willing to throw on a belt with literally any outfit. That's what made the trend so great: There was a belt that could fit in with any early-aught style. There were studded belts for the grungy, hair-streaking, Avril Lavigne types. Those fringed, hanging every which way belts were a hit with the boho crowd. Even red carpet style icons couldn't say no to one with a massive buckle that could be spotted a mile away.

Whether cinched or slung low, there wasn't a belt that didn't make its way around our hips. Get nostalgic about these 17 belt styles every '00s fashionista had stashed in their closet.

Paired with a maxi skirt and spaghetti straps, a disc belt gave us the ultimate boho look. I always thought there was also something very warrior princess about these.

You probably owned a couple of these, as did every single member of your Limited Too-clad girl squard.

We literally wore belts made out of every material known to man in the early '00s. That included the scarf belt, which defintiely got a lot of fanfare.

Nothing took the belt trend to the extreme quite like wearing two or three at a time.

I was really feeling like a free spirit every time I slapped on belts like these. Bring on the hippie vibes!

These may have started as a punk trend, but almost everyone had one by freshman year of high school. Honestly, you could never go wrong with a touch of grunge back then.

7. Low Slung Belts Layered Over Everything

We millennials wanted to belt anything we could get our hands on in the 2000s. A low slung belt made that a mission accomplished, as we paired them with anything from sweaters to dresses to tunics.

The ever popular studded belt helped all of us unleash our inner emo Avril Lavigne.

Dad wasn't the only one who knew how to sport a good neck tie. In the 2000s we were putting them to good use around our waists — although they definitely weren't holding our low-rise jeans up. For this fascination with ties we have Avril Lavigne to thank once again.

A decade ago, bigger was always better when it came to belts. I don't think anyone embraced the trend more than Kim Kardashian. Before she went all high fashion on us, she showed us cool girls how to do an oversized belt right.

Occasionally, we took that whole not-really-using-this-to-hold-my-pants-up-like-at-all thing too far. If we weren't going to use them as intended anyway, we figured we could forget the waist and slide them on down past our hips instead. So chic!

Nothing screamed badass quite like a chain belt. A single, dainty chain that hugged the hips just right had two parts sass mixed with a cup of femininity. But low slung, intertwining, metal chains were total rockstar status.

We all know bling is a girl's best friend, so it's only right that we bedazzled the hell out of our belts. They definitely complimented a pair of embellished, Lizzie McGuire-esque hip huggers.

There came a time when skinny belts reigned supreme as we shifted away from the oversized ones of the early 2000s. Don't worry: They still didn't serve a practical function.

I honestly never understood these front-hooking contraptions, but that didn't stop me from joining the ranks of millennials who owned one! As big as these waistbands were, they were basically the awkward stepsister of the oversized belt.

A belt made of sequins?! What more could a girl ask for back then?! The blingier, the better.

17. Belts That Held Absolutely Nothing Up

A 2000s cool girl wasn't afraid of a belt that had everything but the kitchen sink draping from it. No matter how amazing these belts were, they did absolutely nothing to support our trousers. Hell, they weren't even inside our belt loops half of the time! But at least we looked so very cool.