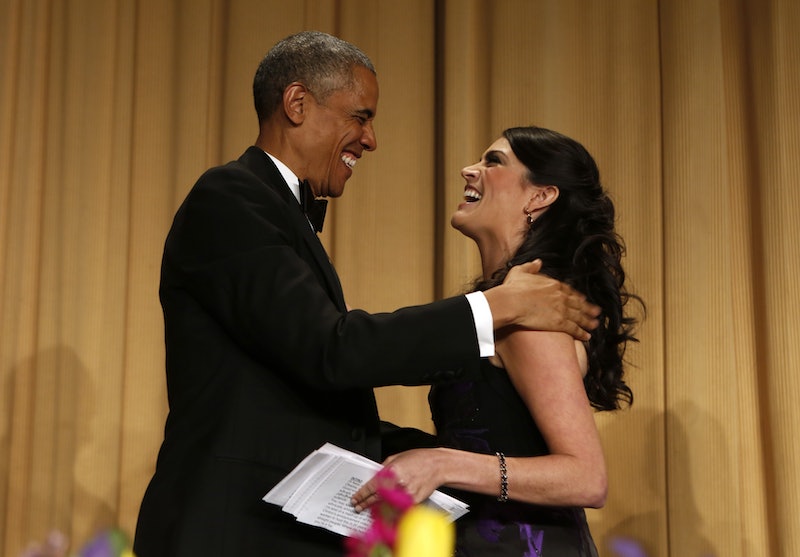 The answer is... five. Yup, since the first White House Correspondents' Dinner in 1920, only five women have hosted Washington's "nerd prom." This shouldn't come as too much of a surprise since both politics and journalism are considered to be "boys clubs") — women were not even allowed to attend the event until 1961, when President John F. Kennedy said he would boycott if the ban on women was not lifted. Still, it wasn't until 1992 that stand-up comic Paula Poundstone hosted the White House Correspondents' Dinner, becoming the first woman to do so.

In the 24 years following Poundstone's history-making performance, only four other women have hosted the event: Elayne Boosler (1993), Aretha Franklin (1999), Wanda Sykes (2009), and Cecily Strong (2015). Though 2016 is shaping up to be a historic year for women in politics — Hillary Clinton may become the first woman president — it will not be a woman comedian, but rather Larry Wilmore who will host the dinner.

It's essentially a universally accepted fact that women who perform on stage are scrutinized exponentially more than their male colleagues, and Poundstone found this when she made her historic debut as the first women to host the White House Correspondents' Dinner. Poundstone told Elle that she rarely thought of her gender when performing until she hosted the annual event, saying:

I had worn this white tuxedo. And in the newspaper the next day, they had the balls to write about it. I think that might have been the one time that I ever thought about the fact that I was a woman. Because would they have done that for any other performer? Did anybody talk about what [Don] Imus wore? Or what Jim Morris wore the year before me? I just remember being struck by how much ink they wasted describing my outfit.

Some of the women who have hosted the White House Correspondents' dinner have used the platform to make important points about the the way in which women are depicted in print and on TV. In 2015, White House Correspondents' Dinner host Cecily Strong asked all the journalists at the dinner to raise their hands and repeat after her, saying, "I solemnly swear not to talk about Hillary's [Clinton] appearance because that is not journalism."

Clearly, the oath was quickly forgotten — Clinton's hair continues to be a hot topic.

Perhaps, if there is a woman in the White House next year, another woman will host the White House Correspondents' Dinner, but until then the list will stay pitifully short.

More like this
How To Support Gun Control Reform Right Now
By Morgan Brinlee and Carolyn Steber
Boris Johnson’s Leadership Is In Question – Again
By Bustle UK
34 Quotes That'll Inspire You On Juneteenth & Beyond
By Syeda Khaula Saad and Siena Gagliano
How To Fight For Reproductive Rights, Based On How Much Time You Have
By Courtney Young
Get Even More From Bustle — Sign Up For The Newsletter