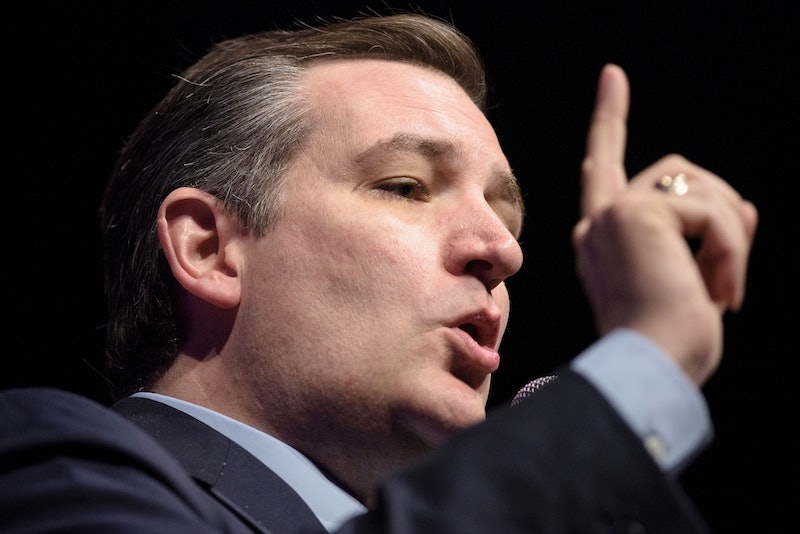 During the 2016 primary season, many Republican leaders have disavowed Donald Trump — claiming he's not really a Republican, questioning his political qualifications, and denouncing his racially-tinged comments. However, even though the party has tried to derail Trump, there hasn't been much of a movement among its leaders to back Trump's chief opponent, Ted Cruz. How come? Well, presumably because Republican lawmakers don't like Cruz either.

During a talk at Stanford University on Wednesday night, former Speaker of the House John Boehner spoke contemptuously of Cruz, standing as a reminder of just how much D.C. Republicans dislike the Texas senator. Boehner called Cruz “Lucifer in the flesh,” and continued on to say of him, “I have Democrat friends and Republican friends. I get along with almost everyone, but I have never worked with a more miserable son of a bitch in my life.”

Boehner went on to swear he would not vote for Cruz even if he is on the ballot in November, and to speak of his friendly relationship with Trump — according to Boehner, they are "texting buddies." The now-retired Speaker of the House is not the only high-ranking Republican to feel this way. In fact, Senate Majority Leader Mitch McConnell doesn't like Cruz either, and has led efforts against the senator.

Why do Republican leaders such as Boehner and McConnell dislike Cruz so much? They have their reasons. First of all, according to The Atlantic, Cruz lead the 2013 government shutdown. Hoping to defund Obamacare, Cruz lead a filibuster on the floor of the Senate, speaking for 21 hours straight. Even though Republican leaders also wanted to end Obamacare, few Republicans supported Cruz's actions — the event lead to the lowest approval ratings for the Republican Party in decades. Events like this proved to Republicans that Cruz was far more interested in his own agenda than the party's, and did not gain him many friends in Washington.

Cruz has continued to show that he does what he likes in the Senate, often going against his fellow Republicans. The Atlantic reported that he even attacked a 2015 crime bill that had garnered bipartisan support, and was sponsored by his one friend in D.C., Senator Mike Lee of Utah.

During his tenure in the Senate, Cruz has proven to Republicans that he is more than willing to go against them to fight for his own agenda — much of which consists of thwarting President Obama's policy proposals. While this might endear Cruz to voters who are also disgruntled with politicians, it certainly hasn't endeared the Senator to his party's leaders.

As Donald Trump continues to increase his delegate count, it's likely that many Republican lawmakers will follow Boehner's lead in agreeing to vote for the GOP frontrunner. Republican leaders feel little allegiance to Cruz, after he's shown so little party loyalty in the past.