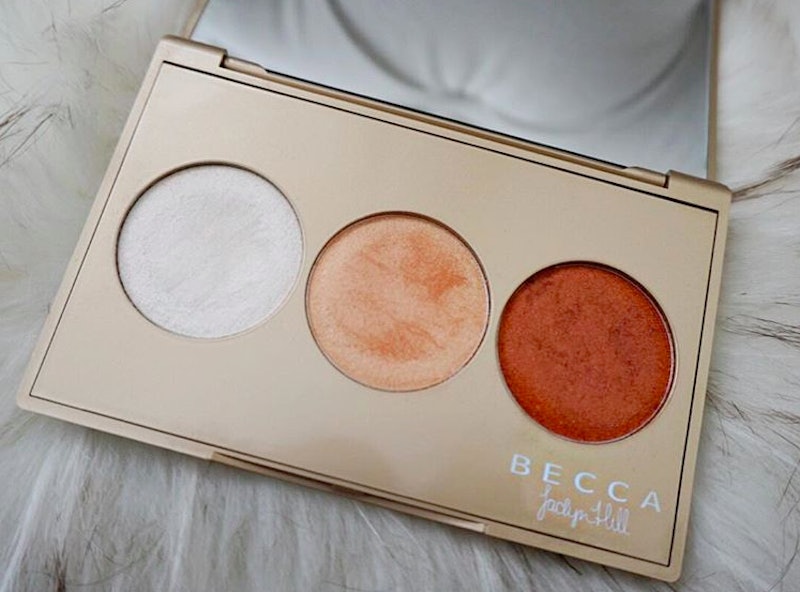 Hi, have you freaked out yet today? Well, the mysterious the announcement of an upcoming, brand new BECCA x Jaclyn Hill Champagne Pop product is bound to elicit at least a few seconds of excited screaming. After some speculation earlier this week, Hill finally confirmed the new round of collaborations via her Snapchat on Thursday. There aren't too many details on what exactly this next product launch will be, but Hill did say that we "have not seen the last of Champagne Pop" because they are "expanding the family." My cheeks are practically dancing with excitement.

So what can we expect from BECCA x Jaclyn Hill? Well, of course, it'll be a highlighter of some sort. But some fans on Twitter are speculating that it will move away from the powders they've launched in the past, instead being either a backlighting primer or a liquid highlight. However, she teased a bit of the packaging in the same Snap story, and it looks like the new product will probably be round — just like the last Champagne Pop single.

But who knows! That package could also fit a pretty bottle of something fluid, or it could be another palette, like the limited edition three pack BECCA and Jaclyn Hill launched for the holidays. Bustle has reached out to BECCA for comment on what exactly the new line will include.

In the meantime, let's just be happy there's more Champagne Pop in our future. No matter what exactly it is, I know I need it in my makeup bag.