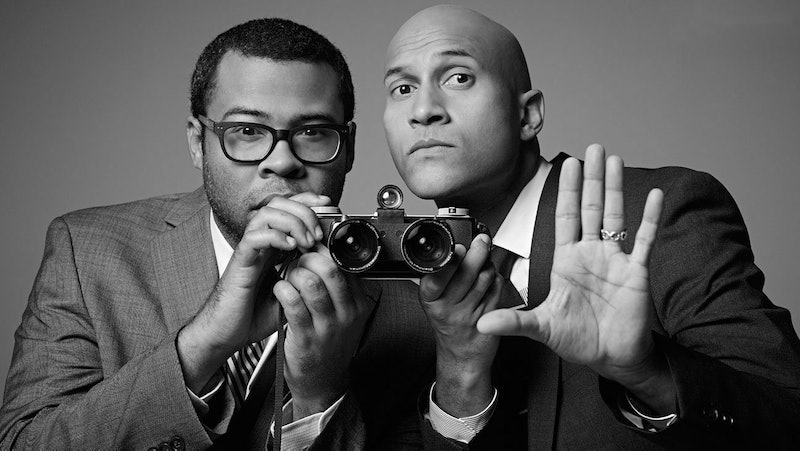 Long before their big screen debut in Keanu, comedy duo Keegan-Michael Key and Jordan Peele, better known by their Comedy Central show name, Key & Peele, have used their craft to shine a spotlight on racial stereotypes and tropes. Though Key & Peele is sadly no more, five seasons of hilarious and often controversial sketches still have a beating heartbeat on the internet. Substitute Teacher, a sketch which has racked up a mind-blowing 93 million views on YouTube, encompasses the duo's satirical sensibilities.

It goes like this: When an African American substitute teacher "who taught school for 20 years in the inner city," steps in to teach a majority white class, there is a clear divide. When the teacher mispronounces traditionally white names like Jacqueline and Blake, the students attempt to correct their sub — who refuses to be corrected. It's undeniably hilarious.

According to Peele, comedy is the perfect vehicle to get mass audiences to pay attention to larger issues such as racism. "We do it through our art," he tells me.

But there's an unfortunate contradiction at play. In a recent interview with The New York Times , Peele said, "You’ll hear a lot of Hollywood execs talk about: 'African-American-led movies don’t do well overseas.'" In the same interview, Key said, "It’s been frustrating when someone says, 'You’re not black enough.'"

It's a curious equation — how can someone be both too black to sell movie tickets, and not black enough to portray black characters?

"We know that if we wrap it in a package that is fun enough and people enjoy it, that eventually both sides of that thing are going to be solved," Peele says. "All we can do is work harder and harder and prove both of these things wrong just by existing."

And over five seasons of sketches, the duo has worked hard to do just that, and have made audiences acknowledge racial stereotypes and problems in the black community. For example, Key & Peele released a sketch

police brutality titled Negrotown, where Key arrives to the "utopia for black people," and is shown around by Peele. "You won't get followed when you try to shop. You can wear your hoodie and not get shot," he sings.

In Sex With Black Guys , Key and Peele overhear two white women at a bar talking about why they want to sleep with black men. What starts out as flattering compliments ("they are way better at pleasing white women,") quickly turns offensive (..."because they're used to pleasing their white masters").

Black Ice, a sketch that plays with how the phrase "black ice" sounds like "black guys," has Peele as a weather reporter attempting to avoid saying the phrase. His white colleagues, however, won't stop saying things like, "A perfectly safe neighborhood can suddenly be terrorized by the appearance of black ice." Peele's reporter fights back: "Well... just because black ice looks different than white ice doesn't make it any more dangerous."

They're not putting out

episodes of Key & Peele, but their latest collaboration, Keanu, a feature-length film in theaters about two friends who come up with a plan to retrieve a stolen kitten by posing as drug dealers in a street gang, once more serves up a bevy of racial stereotypes, and through the movie's 98 minute run time, cleverly disprove them all.

"All those stereotypes, every single one of them all show a softer side, because everybody cares about a kitten," Key says.

"I don't care if you're a drug dealer or a cartel leader. [Keanu] is the symbol. He's the juxtaposition: A kitten with a do-rag. You're now examining a part of the African American culture you may not have been as familiar with. It lends itself to the notion that the African American experience is not a monolith. You can be tough and be African American and not necessarily be a rapper, or a gangster, or anything. Does it mean that we can't be masculine unless we are those things? I have to be a boxer, or a drug dealer, or a rapper, or my experience isn't legitimate?"

Peele expands on this idea. "The big picture for us is that guys like us would never be allowed in an action movie," he says. "Not just the fact that we're African American, but the fact that we're not badasses. We're everyday guys. We're softies. So being both softies and African American, we wanted to see what a movie would look like if we took guys like us and allowed them to be the lead of an action movie."

Challenging Hollywood and audiences like this couldn't come at a better time. The entertainment industry's whitewashing problem is no secret, especially coming off the heels of the #OscarsSoWhite social media campaign, which pointed out the disturbing lack of Oscar nominations for people of color. High-profile celebrities such as Jada Pinkett Smith and Spike Lee boycotted the iconic ceremony, and Academy President Cheryl Boone Isaacs released a statement in regard to the campaign, saying she was “both heartbroken and frustrated about the lack of inclusion," and that, "the Academy is taking dramatic steps to alter the makeup of our

According to researchers at

of Southern California, of the top 100 films of 2014, three quarters of roles were white, and only 17 percent of the top movies featured non-white leads or co-leads.

Despite being told African American films might not do well at some box offices or translate to overseas audiences, the duo's comedic success is their personal assurance that they can carry a film like Keanu. And they're not wrong. Key and Peele's big screen bankability is already palpable. Thursday night screenings brought in over half a million, and Keanu is expected to win the weekend at the box office.

More like this
Stormzy Made A Passionate Speech About The Importance Of Diversity
By El Hunt
Pro Footballer Zander Murray Is "Blown Away" By Support After Coming Out
By Sam Ramsden
Mel B Speaks Out Against Domestic Violence In A Powerful Speech
By Sophie McEvoy
Everything You Need To Know About ‘Black Panther: Wakanda Forever’
By Bustle Editors
Get Even More From Bustle — Sign Up For The Newsletter