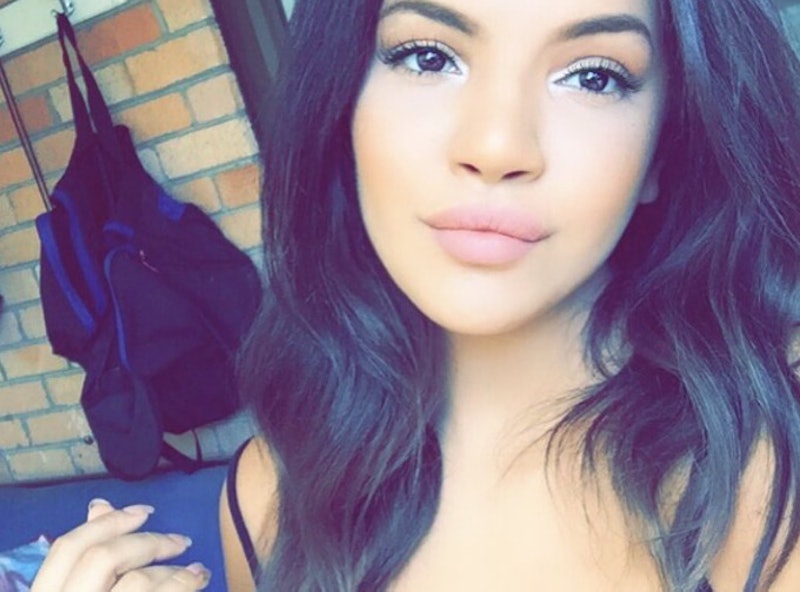 Online dating can be tough for women. Unfortunately for the people on dating apps and sites who make women feel unsafe online, their dating app transgressions may get aired for all of the Internet to see. After all, why shouldn’t women vent their frustrations over the dumb sh*t they have to deal with from clueless people? Takara Allen, 22, recently called out a Tinder date who suggested she bleach her skin in order to be "prettier." Yeah. Some people, right?

Here’s how the story goes: Allen, a makeup artist based in Australia, met Nikolas on Tinder. They exchanged numbers and went on a last-minute date since he happened to be in her area. According to Allen, the guy seemed OK on the date — until he dropped this WTF comment, “You’re pretty for a black girl.”

Allen didn’t plan on meeting or speaking the guy ever again until she received a completely ignorant and disrespectful text message from him a couple weeks ago where he commented on her Instagram photo:

“My initial reaction was shock,” Allen tells Bustle. "It quickly turned to sadness and took me back to being 15 and feeling like I had to wear the lightest shade of foundation for people to want me or find me desirable. That's a stage of my life I'm thankfully over now.”

After Allen publicly shut down her date, she says she was really surprised that her story even gained traction. As she tells Bustle, it wasn’t what she was after at all. In fact, as many women in this situation do, she posted it on Facebook out of anger and to find support from friends after feeling upset over it.

“I feel like not just mixed-race women but most women of color and even men experience fetishism and that's become really apparent to me. Everyone is drawn to certain features and everyone has different preferences,” Allen says. “But when they go from being like ‘You have nice eyes’ to ‘I love black girls,’ it becomes racial fetishization. While they may think it's a compliment, it's really not. Compliment me for me, not for generalizations or assumptions you are making of me purely because of my ethnicity or the color of my skin.”

Overall, the general reaction to her story has been supportive. But as Allen says, “There have been a lot of racist comments telling me that I'm not black. That is really hurtful.”

“I think that's a struggle a lot of half black people feel. We don't look white and the majority of us will never be accepted as white,” Allen says. “At the same time you have a small minority of the black community telling us we are not black and that makes it really hard to feel like we fit in. I understand that I don't share the same experiences as someone with darker skin does and I'm not going to pretend like I do. But it's really sad to me that there is such a divide between light skin and dark skin. It bugs me that when things like this are said to darker women it doesn't get as much attention most of the time but I'm glad that I have ended up with this opportunity to bring attention to the problem of skin bleaching.”

The practice of skin bleaching is exactly what it sounds like—using skin lighteners in order to make your skin whiter. While skin lightening products aren’t too common in the U.S., they’re popular in other parts of the world such as Latin America, the Middle East, India, Philippines, Japan, and Africa. In fact, a 2013 University of Cape Town study found, one in three South African women bleaches her skin.

As of now, Allen has blocked Nikolas all social media. “A lot of people who are close to me have seen that I still have him on [Tinder]," she says. "I doubt Tinder is going to go out of their way to remove someone making a negative or racist comment. They would have to remove so many people from the app if that was the case. Tinder hasn't reached out to me at all and I wouldn't expect them to.”

A representative from Tinder tells Bustle that Nikolas has been recently removed from the platform. “Tinder does not tolerate bullying or racism on our platform and when we see such activity, we take action. Our users also have the ability to report inappropriate behavior. We want to keep Tinder a safe and fun place to make connections."

“Unfortunately in this age where people feel protected by their computer screens they feel more confident saying things like this. But the computer screen isn't going to protect the mind sets of the people you are saying it to,” Allen says.

Overall, the greatest lesson Allen has learned from the entire ordeal is this, “No matter what others say and how much negativity people will project at you, you have to ignore all that and always stand up for yourself no matter what. You can't let others silence you."