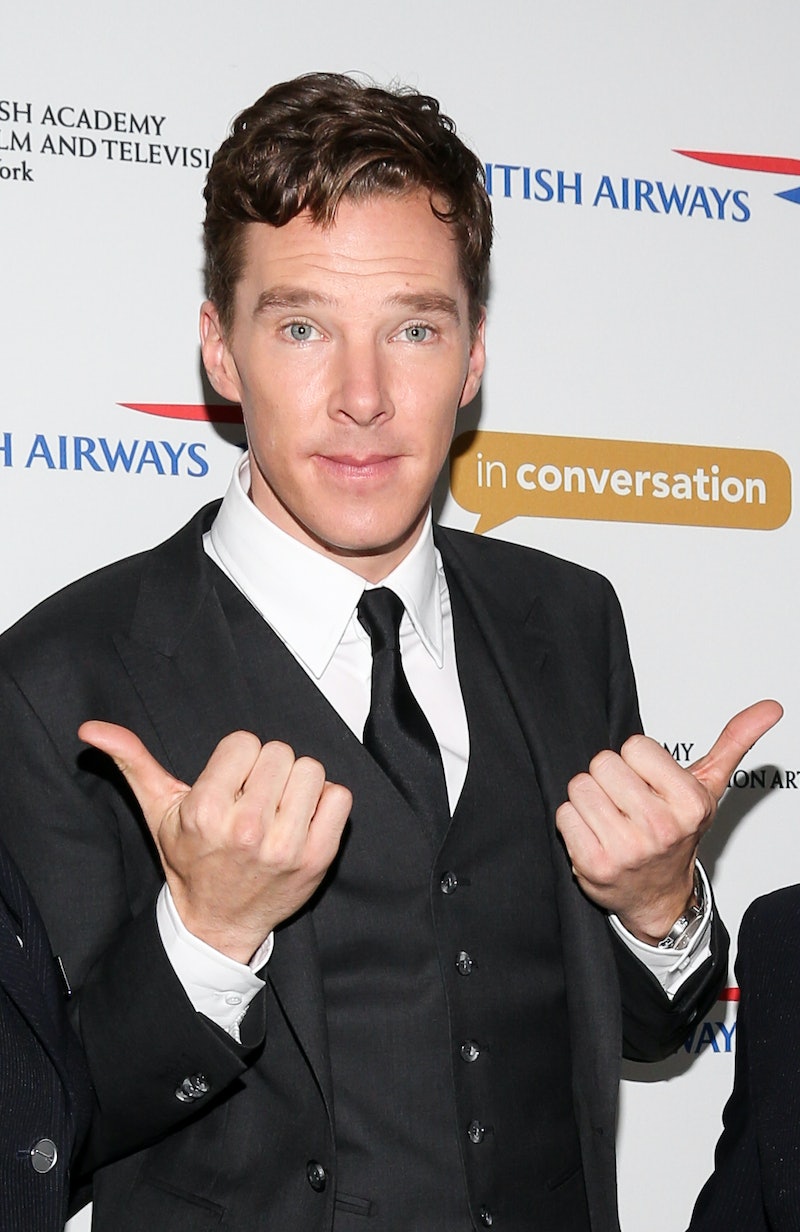 There is a reason the world has gone so wild over British actors like Tom Hiddleston and Benedict Cumberbatch and it's not just the voices, or their cheekbones, their propensity for vest-wearing, or even how endlessly GIF-able they are. No, they are indeed very eloquent, talented actors, and the kind of men who use words like "verbatious" in casual conversation. All of this was re-proven tenfold in this hour-long, thoughtful interview with Benedict Cumberbatch. Ever wonder when you'd be provided with a vivid mental image of what it's like when Benedict Cumberbatch and Meryl Streep sit down and talk about their craft? Ever wanted to see Cumberbatch's Peter Jackson impression, or his advice for actors experiencing the rise to fame ("always lock the toilet door")? The interview — conducted by The Hollywood Reporter's Scott Feinberg as part of a BAFTA event — is lengthy, but that's actually part of its appeal.

The sit down plays like an episode of Inside The Actor's Studio, allowing fans of Cumberbatch and his work to really feel part of a long conversation with him about the ins and outs of what it means to be an actor and a thespian. For example, he spoke at length about the experience of making The Fifth Estate, a process which was made all the more complicated with Julian Assange's denouncement of the biopic. Cumberbatch, however, stated that given the chance again knowing both of Assange's disapproval and the box office failure the film would become, he would still take the role. As he said, "I feel strongly as an actor that you should be allowed to try and dance with these very complex subject matters," of which he considers The Fifth Estate to have been a tantamount example.

Cumberbatch, as famous for his acting as he is his facial features and rabid fanbase, also commented on those aforementioned features and marveled at the shift in how people relate to things like his face as he becomes more and more famous:

Feinberg: There's this sense that you're timeless, that you could have just as easily been dropped into a movie with Trevor Howard or, you know, Peter O'Toole.

Cumberbatch: Blessing of having a weird face. Something between an otter and something that people find vaguely attractive. Or just an otter, which is vaguely attractive. In all seriousness, I've kind of grown up with this face and it's been in the industry for ten years and now it's getting on these hottie lists, I just gotta go — it doesn't make any sense, because I was nowhere near the thousandth hottest face when I started out. So I know a lot of it's projection, which is flattering for the work I suppose.

And on working with Streep (and how Streep does it):

She and I had this conversation, because I was watching her bring Violet Weston to life and I was thinking, just 'how the fuck is she doing that.' She's playing grief, she's playing sorrow, esophageal cancer, she's playing the effects of the cancer drugs or not the drugs, she's playing the uppers and downers that she's taking, and she's playing everything that's been boiling in her since [she was] a child, an abused child. And I just saw this actress at the height of her powers being able to play every single note of her character not even like the conductor of an orchestra but like she was literally running around and playing every instrument, and it was really phenomenal.

And I thought 'how the hell did you begin? What was the first in, did you work from the outside on this one or?' And we were having a cigarette, and it was election night, and we were chatting 'round the back and I was just like 'I've got to ask you, it's wonderful watching you work — how do you start? Do you have a base that you always build from?' and she went 'What do you mean, like a specific technique?' and I went 'yeah' and she went 'No, I think — I think it changes all the time.' And I went 'Oh my god, to hear someone say that [was such a relief], because that's what I do.

That anecdote, about six minutes in, is also worth noting because Cumberbatch also does a weirdly spot-on impression of Streep and her understated vocal mannerisms.

If you're the kind of person who, like me, geeks out every year when full hour plus long roundtables of actors talking about their work, lives, and craft pops up, then this is probably an interview you will enjoy. The same goes for if you just generally enjoy having a Cumberbatch in your life.