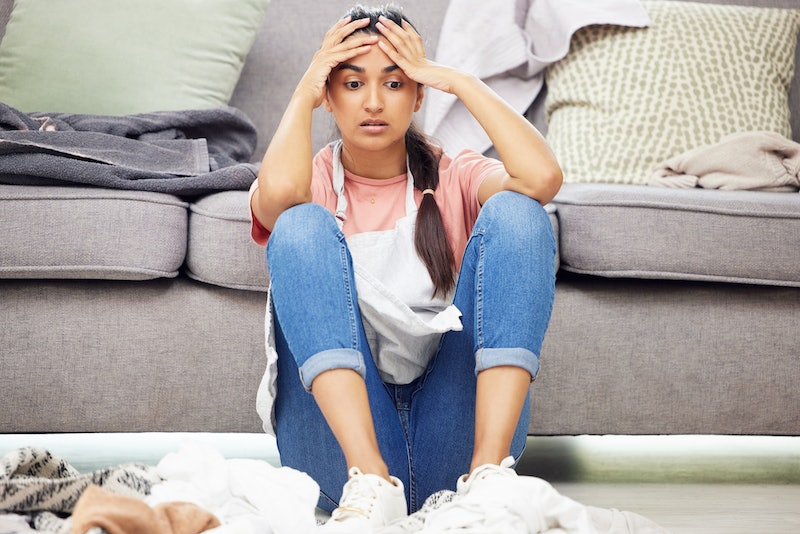 Have you ever spent so long trying to decide where to go for dinner (or what movie to see, or which body parts you want Tom Hiddleston to autograph) that you end up missing the opportunity entirely? It's annoying AF, of course, but there's a world of difference between simple indecisiveness and signs of decidophobia. Coined by Princeton philosopher Walter Kaufmann in his 1973 book Without Guilt and Justice, the term is exactly what it sounds like: A paralyzing fear of making decisions. Although Kaufmann focused on decidophobia's philosophical implications — he theorized conformity stems from a universal fear of making difficult decisions — it's also a real disorder, just like any other phobia.

To understand decidophobia, it's important to understand phobias in general. Fear is a natural part of life, but phobias are characterized by a disproportionate intensity. "The fear has to be out of proportion to the actual danger posed by the specific situation or object," psychiatrist Dr. Jennice Vilhauer tells Bustle over email. In the case of decidophobia, this would be the fear of making decisions; although it's natural to worry over a huge life decision, someone with decidophobia is so terrified of making choices that they go out of their way to avoid them. Fortunately, specific phobias are fairly easily treated. Decades of research have shown that exposure therapy, which gradually exposes the patient to the source of their fear in a safe context, is a highly effective way to overcome the initial fear response.

Let's take a look at five signs of decidophobia below, but as always, remember that only professionals can diagnose psychological disorders. If you recognize any of the symptoms below, it might be a sign to talk to a psychologist or psychiatrist.

1. You Go Out Of Your Way To Avoid Choices

As mentioned above, phobias are characterized by avoidant behavior. "The fear is causing actual avoidant behavior, so there are things occurring that the person might want to do but can’t do because of the fear," Dr. Vilhauer tells Bustle. In the case of decidophobia, the fear is so distressing that people will go far out of their way to avoid making a decision. Needless to say, this can result in serious impairment; although decidophobia may not be life-threatening, an inability to make decisions can affect your relationships as well as control over your life.

2. You Depend On Others To Make Decisions

According to All About Counseling, people with decidophobia frequently depend on others to make decisions for them. Over time, this may lead to the development of unhealthy dependence on other people.

3. You Put Stock In Psychic Guidance

Similarly to putting decisions in the hands of other people, All About Counseling notes that people with decidophobia may place heavy emphasis on otherworldly forms of guidance: Tarot cards, psychics, astrology, and so on. There's nothing wrong with believing in such methods, but relying on them for every life decision may not be the healthiest course of action.

Phobias are characterized by intense fear, which may manifest in physical symptoms like dizziness, rapid heartbeat, or trembling. However, it's important to note that although phobias can inspire panic attacks, it's not always the case. "The distress could be so great as to cause a panic attack, but they don’t necessarily go together," Dr. Vilhauer explains. "You can experience intense fear that leads to impairment without having a panic attack."

5. Your Indecision Interferes With Your Life

Like most psychological disorders, phobias cause distress. That's what elevates simple indecisiveness into decidophobia — it's only thing to go with the flow and leave most decision up to other people, but if your fear of making decisions causes impairment to your daily life, it's probably time to talk to a professional.

More like this
What Is The Forest Personality Test? The TikTok Trend, Explained
By Georgina Lawton
Young People Are Still Experiencing Period Poverty In UK Schools
By Sophie McEvoy
The Viral 'Little Miss' Franchise Is Focusing On Mental Health Next
By Darshita Goyal
The 3 Most Calm Zodiac Signs, According To Astrologers
By Kristine Fellizar
Get Even More From Bustle — Sign Up For The Newsletter