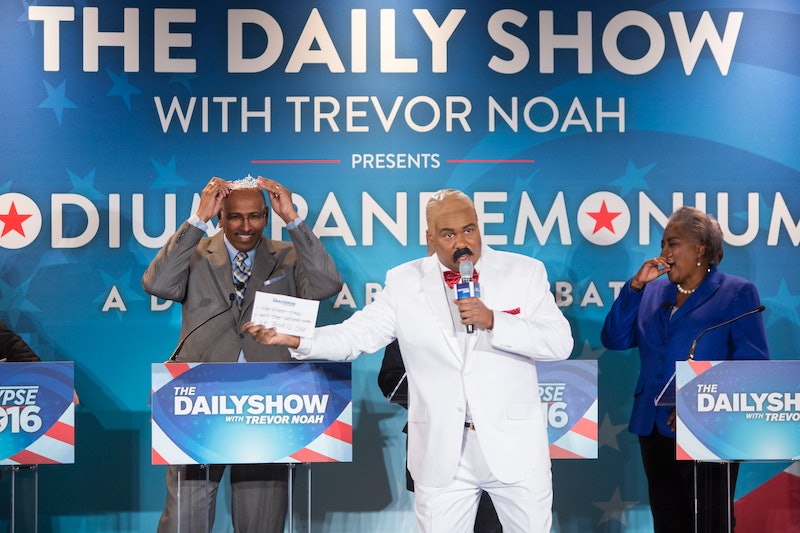 Donald Trump has been on TV before — but not quite like this. Reprising his role of "Black Trump," Roy Wood Jr. premiered a rap video on The Daily Show featuring quotes by Donald Trump. The video, titled "They Love Me," uses hip hop to satirize Trump's racism, sexism, and bizarre belief that all the people he attacks are actually his best friends.

“Trump doesn’t belong in the White House. Donald Trump belongs in a rap video,” Wood told Daily Show host Trevor Noah. “Everything Trump says is straight out of a rapper’s play book. He brags about his money, he’s disrespectful to women, and there’s always fights at his concerts."

Yes, Wood's description of a "rapper's play book" is problematic in that it perpetuates the notion that all rap is violent and sexist, despite many rappers using their music to tackle nuanced issues like police brutality and the War on Drugs. But his idea to set Trump's commentary to a "dope beat" was a brilliant one. Noah was initially unconvinced, speculating that Trump "is just saying stuff," but Wood argued that it was "the same way rappers just say stuff. Do you really think Jay Z has 99 problems? He's a billionaire. At the most he's got 12 problems." The song includes one-liners like "Careful Lyin' Ted I'll spill the beans on your woman," "I have black guys counting my money," and "I win, I win, I always win" — and all the quotes have exact dates for reference. Check out the full song below:

It gets even better: The Daily Show has created a website completely devoted to Black Trump, and it has the video, audio, annotated lyrics, and social media references, as well as some photos of Black Trump himself.

Twitter users were quick to congratulate Wood — that is, Black Trump — for his musical brilliance:

The video comes as Trump gets closer and closer to securing the Republican presidential nomination; he already has 954 of the 1,237 required delegates pledged. His rivals, Texas Sen. Ted Cruz and Ohio Gov. John Kasich, are focusing their resources on different states to prevent more Trump victories, but their chance of success is so slim that a little comic relief would not go amiss. So Black Trump is off in the world, doing what Black Trump apparently does best: Making America great again for everyone who needs a break from the Donald.