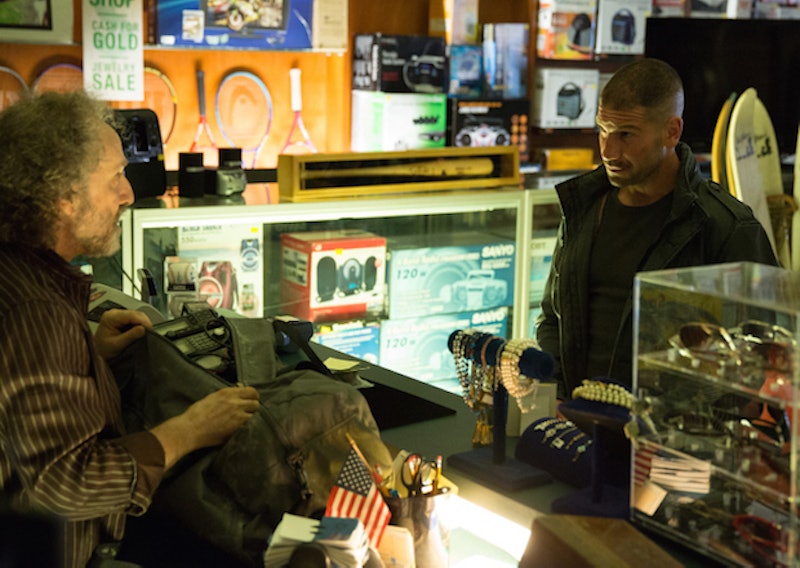 It's been a minute since we had any new Daredevil news to obsess over, so I'm delighted to announce that the wait is over, and I'm about to drop a juicy little nugget of information into your lap that you didn't even dare to hope for. We're officially getting a Daredevil spinoff, so the only thing left to wonder about is when will The Punisher start airing? Or I guess... technically there's more to wonder than that, but I got so excited that I skipped right ahead. Netflix has given the almighty thumbs up to the series, which will focus on the main bad guy from Daredevil's Season 2, which was released Mar. 18, 2016. That character was of course The Punisher, also known as Frank Castle, played to brilliance by Jon Bernthal, who will naturally be returning to terrorize the spinoff.

Frank Castle's deal is that he's a vigilante whose transformation from a normal human like you or me was spurred on by the murders of his wife and two children, and whose rage has now taken him so far over to the dark side of things that he causes major problems for Daredevil. To put things lightly. But now we might get to see a more human side of him, given that he'll have his own series. It makes me wonder if the character will be a bit more sympathetic, since he's driving the narrative and we're seeing the world through his eyes.

It's something we'll have to wait to find out, as Netflix hasn't yet given us a release date. They announced the exciting news on Apr. 29 with a very spooky tweet, but so far the only information they've provided is "coming soon."

However, based on the fact that the rumor of a Punisher spinoff was just thrown around for the first time in January 2016, I imagine that we're still very early in the process for this series. Apparently, producers wanted to see what the public reaction would be to the antihero when Daredevil Season 2 dropped in March 2016, so it's very likely that it's only just been greenlit and writing, casting, and filming are still far in the future.

So get excited, yes, but try to make sure it's a level that you can maintain for a while, at least. If I had to guess, I'd say maybe we see The Punisher hit Netflix around early Summer 2017? Literally just a guess, but feels right in my bones, dare I say it. (I am sorry, I will show myself out.)