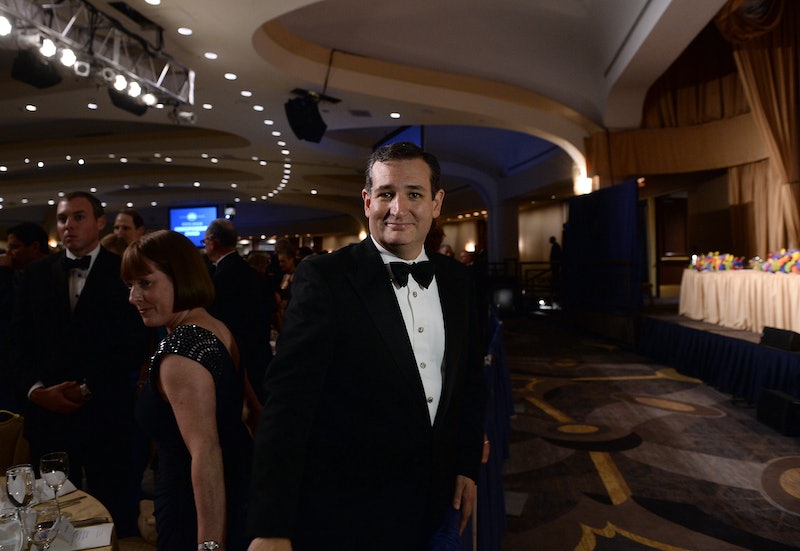 Texas Sen. Ted Cruz is known for a lot of things—his vast knowledge of the Constitution, his hard-line conservatism—but his robust sense of humor isn't one of them. And on Saturday night, when Washington, D.C. loosens its collective tie and lets it all hang out, Cruz would either have to adapt or suffer through several hours of the firing line. So is Ted Cruz at the White House Correspondents' Dinner, or did he decide to sit this one out? If Cruz plans on taking over the dinner in 2017, he could use the opportunity to take some notes on our current Comedian-In-Chief.

This year seems like a comedic full circle for Cruz. The senator's presidential bid was a month old by last year's dinner, and President Barack Obama and 2015 host Cecily Strong took the opportunity to take several swipes at the Republican hopeful. And there was already plenty of fuel for their jabs, including Cruz's absurd claim that he was a modern-day Galileo for denying that climate change (and, no, that's not the joke — he actually said that!) and, in a seemingly prescient move, the fact that he had absolutely no chance of actually winning the nomination. I guess there really is a little truth in all jokes.

It looks like Cruz didn't have the heart to face the inevitable litany of jokes at his expense, because he didn't show for Washington, D.C.'s nerd prom. I mean, how could he pry himself away from his campaign, after all? That's commitment.

Regardless, there will likely still be jokes at the candidate's expense. And this year will likely be particularly vicious. Not only is it Obama's chance to get the last laugh, but it's an election year. Cruz's visibility at this point last year is nothing compared to what it is now, when he's constantly marketing himself to Americans (and, at times, making a fool of himself in the process). Although I predict the majority of the jokes of the night will be dedicated to the walking meme/presidential candidate Donald Trump, there's definitely room for some jokes about the alleged Zodiac Killer having a ridiculous obsession with Campbell's Chunky soup. If Obama really wants to stick it to the most hated man in Washington, maybe he should consult former Speaker of the House John Boehner. I heard he has some thoughts on Cruz.

More like this
Here’s Who Victor Chooses In The ‘Love, Victor’ Season 3 Finale
By Brad Witter
John Mulaney & Olivia Munn's Relationship Timeline Features The Comedian's First Father's Day
By Jordyn Tilchen
'The Undeclared War' Took Inspiration From This Gavin & Stacey Location
By Maxine Harrison
How To Fight For Reproductive Rights, Based On How Much Time You Have
By Courtney Young
Get Even More From Bustle — Sign Up For The Newsletter