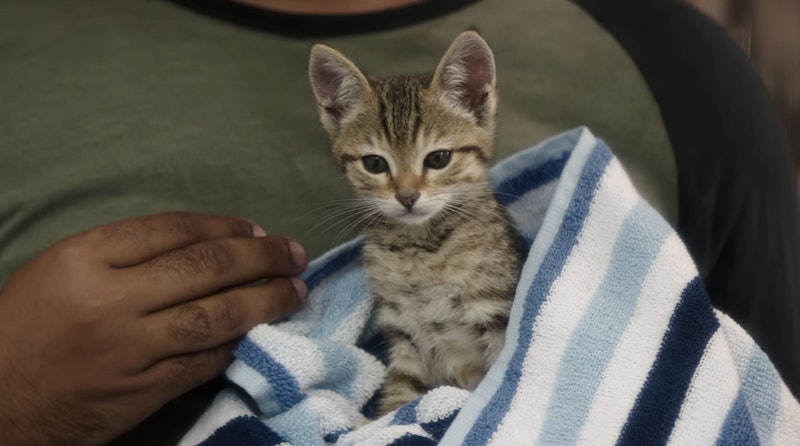 Jordan Peele's worried about the competition in his new movie, Keanu — and can you blame him. Costar rivalries are a Hollywood staple (think: Bette Davis and Joan Crawford or Peter Sellers and Orson Welles) – but it's a little different when you're playing against an adorable kitten. Keanu star Peele recently told Entertainment Weekly, “If you’re on screen with a kitten, everyone is going to be looking at that kitten, including me. I’m in the movie, it’s my first time on screen, I have the opportunity to see myself, I’m over here looking “What’s this guy doin’? What’s this guy doin’?’”

So how cute is this kitten, exactly? Screen idol levels of adorable, according to Peele who compared working with the kitten to working with everyone's favorite feminist meme character: “Having a kitten on screen is a little bit like having a tiny Ryan Gosling in your arms. You’re done.”

As all '90s kids will know, Peele's not the first actor in history who has had to battle for the audience's attention when set against the pure cute factor of an adorable animal co-star. But which animals were the most adorable in the battle of the cute? Let's review, shall we?

That perma-grumpy face. The fact that he's basically a big muddy cloud. The same barking-along-to-Beethoven musical smarts that won him his name. When is cute too cute? Also, as the following trailer shows, he likes: eating other people's ice cream without asking first, not showering and pissing off yuppie David Duchovny. Same.

Aesthetics: 6/10 — Great personality, but maybe not the most visually cute?

"Conti stated that using real dolphins does not work as many might think."

Cuteness factor: 4/10 — Creepy robot dolphins aren't cute, especially when set against adorable child Elijah Wood, who looks like THIS in it:

How relatable: 7/10 – He cares about the environment but doesn't totally "get" technology. (Remember when he drops the camera?)

Aesthetics: 6/10 – Love the dramatic jumps. But still a bit creepy, because, as I've mentioned before, for all the close-ups, he's a dolphin robot.

Pigs are tricky characters to really find adorable, because you know what's even cuter? Sausages. Bacon. Ham. No, you stop. But Babe does have several redeeming features: he's an orphan, which makes him seem extra vulnerable and makes me want a ham sandwich less. Also, he thinks he's a sheepdog, so, awww.

Cuteness factor: For the reasons above, he's a solid 7/10.

How relatable: In the "/" economy (you know, where everyone identifies as a model/actor, artist/barista, social media manager/sculptor), Babe's confusion about his own self seems pretty real. 9/10.

Aesthetics: The talking animal stuff is some clever visual effects – but the whole artificiality of it is undermining the cuteness of Babe's aesthetics. 6/10.

A faithful friend. Tons of charisma. But cute? Eehhhh... I'm not buying it. Orca Lassie is, after all, still a killer whale.

How relatable: Grouchy and misunderstood because of issues in your past? Sure, why not. 9/10.

Aesthetics: 7/10 – Willy is a beautiful beast, just not, like, super cute.

Obviously, obviously, Beethoven is the cutest. But the loveable hound better watch his back: Keanu's coming, and he's got accessories.