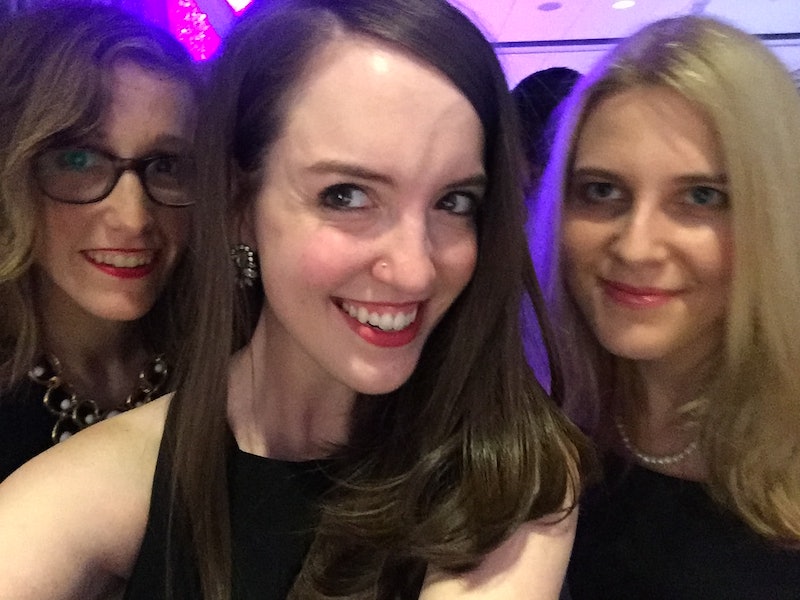 On Saturday night, celebs, politicians, and a slew over-eager journalists (included yours truly) crammed into the basement ("terrace") of the Washington Hilton to partake in the festivities for the White House Correspondents' Dinner aka Nerd Prom. As I maneuvered through the throngs, copiously reapplied lip gloss, and took several photos in inappropriate settings (bathrooms, doorways, escalators), I considered how much Nerd Prom was like real prom. Also, the dress I am currently wearing as I write this has an uncanny resemblance to the one I wore nine years ago to my own senior high school prom (more on that to come).

Let me be clear, by and large, Nerd Prom is dramatically more fun than high school prom — especially the prom I experienced as an anxious 17-year-old who was in no way, shape, or form qualified to wear Stilletos and was way more focused on the Spanish SAT II I was taking in a matter of hours than grooving to Avril Lavigne's "Girlfriend." But there were some striking similarities between Nerd Prom and high school prom, at least for me.

I remember I spent most of high school glamorizing the prom experience. I would fawn over Facebook photos my older friends would post of their beautiful, body-hugging gowns or sophisticated cocktail dresses. For me, the expectations were high, and once I had gone through the nervous breakdown-inducing ordeal that is applying to college from a competitive high school, I focused on prom. It goes without saying, the dress was a top concern. As mentioned above, the dress I wore in June of 2007 is remarkably similar to the one I am currently wearing as I bang out this story. Apparently my taste hasn't changed all that much. See the photographic evidence below, if you don't take my word.

See? I wasn't being facetious. The biggest difference between those two photos is that in the latter, I'm holding a smartphone when I was barely able to manage my flip-phone in 2006. Selfies weren't a thing, which is its own godsend because I was a pretty unattractive teen. But when I look at those side by side shots, it's almost as if I was fated to re-experience my actual prom at Nerd Prom. At the very least, I was fated to experience similar foot pain (I've spent the last 45 minutes barefoot).

Walking into the pre-White House Correspondents Dinner parties, I was struck by how much even the venues could be described as reflecting "high-end prom decor." Shimmery velour-esque curtains and crystal beads dangled in dim lighting. Corners were set up for people to primp and pose for photos with friends.

One difference I quickly noticed was the food situation was much better than my actual prom. I remember my school tossing a handful of mediocre cookies at us, but at least now I saw platters of cheese, vegetables, and bread.

Granted, the sight of this last edible almost made me cry because I hadn't consumed any leavened products for the past eight days (thank you, Psassover). I wouldn't say it was a feast, but this was definitely a step up from my high school prom.

Of course, the huge advantage Nerd Prom had over my real prom was a flowing open bar.

For obvious legal reasons, booze was not a welcomed guest at my high school prom, but at the White House Correspondents Dinners' pre-parties, as long as you could make your way to the bar — which was not always an easy feat — your drink of choice was for the taking.

Yet, despite the fact that social lubricants were widely available, Nerd Prom left me feeling like the awkward interloper who wasn't really supposed to be there, who hadn't really earned her spot at the festivities — at least some of the time. There were moments where I was struck by the outsider feeling that permeated most of my actual prom.

There are the moments when you can't believe you're in the same room with Broad City's Abbi Jacobson and Ilana Glazer (okay, my coworkers were and I JUST MISSED THEM), and then there are the moments you're scarfing down cheese on your own because you're not sure who to talk to. For the record, I have spent more Saturday nights than I can count doing things far worse than eating above par cheese on my own.

The elephant in the room was "are you going to the dinner or not?" Saying you were in the latter camp would invoke the knee-jerk pitying equivalent of "Oh, you didn't get invited to Becky's after-prom party at her parents' beach house? Oh, well it's no big deal." Read: it is a big freakin' deal.

Actually, most of the people I happened to speak to weren't going, and I can't say I felt I was missing much. However, at one point, I observed an interaction between two seasoned journalists with three or four decades on me. One was going to the actual dinner and one was not. I knew neither well, but I could feel the tension. Granted, I didn't have much time to dwell on this interaction. Before I knew it, we were being shooed out, and I was stress eating complimentary bar snacks while I frantically tried to get the WiFi to work to write this piece.

Perhaps the biggest similarity between real prom and Nerd Prom is that they both involve a lot of prep and hype, and then it passes — fast. Oh, and although Nerd Prom isn't over yet, I can confidently write that neither of these nights included my getting laid.