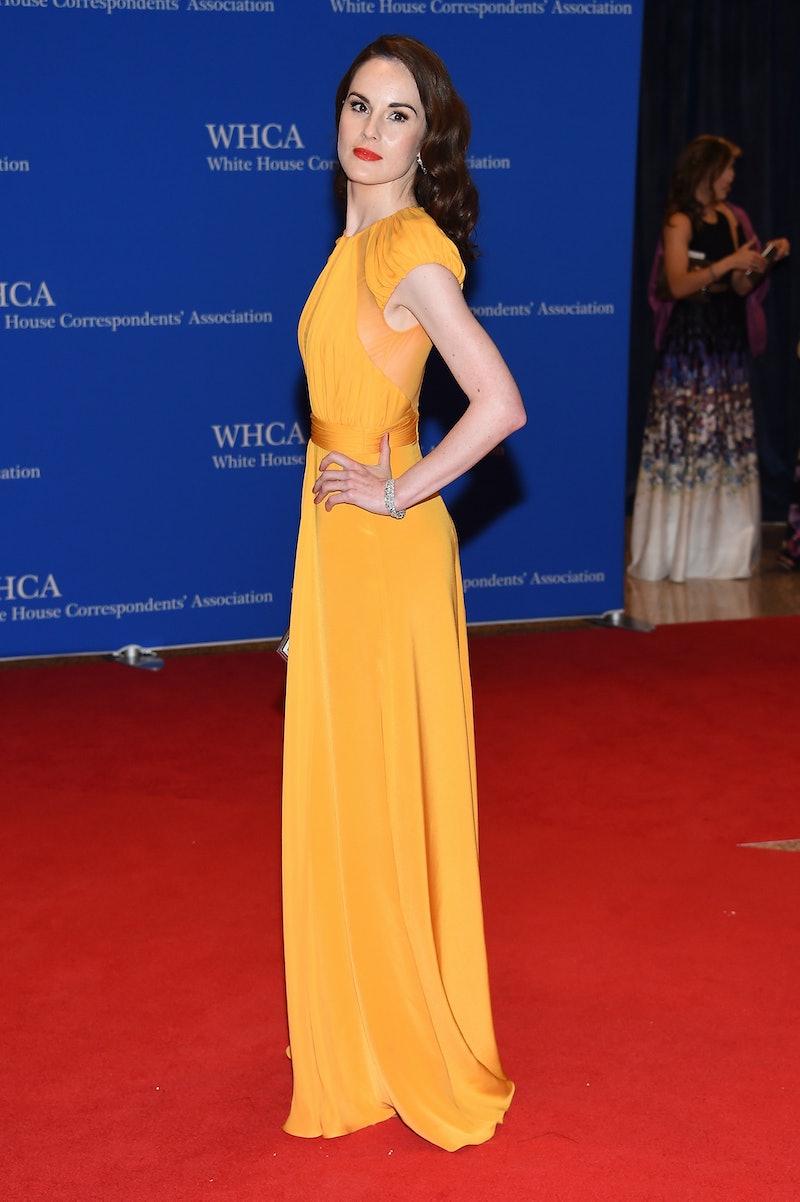 Not all of the 2,700 guests at the White House Correspondents' Dinner this evening are members of the national media and political establishment. News organizations make a habit of inviting celebrities from the entertainment world to come out for the festivities, too. Seriously: Check out some of the 11 most unexpected guests at the White House Correspondent's Dinner that made for some uncanny television.

From Carrie Fischer's show-stealing canine companion to John Cena, there were definitely a few faces on the red carpet that made for somewhat surprising, if not slightly surreal, television. It's not like you'd expect Sergeant Brody, Lady Mary Crawley, and Olivia Pope to be having dinner with President and the press corps, but they were all in attendance tonight — rather, the actors who portray them were!

Inviting celebrities to attend the festivities at the dinner is an opportunity for companies to promote brand synergy across a growing number of platforms, as well as to add some sparkle to the event. For political junkies at home, it offers them the chance to glimpse some of their favorite stars interacting with their favorite politicians, keeping the conversation coming even after the event is officially over.

Without question, the best guest on the red carpet tonight. No word yet on if Gary is actually considering an independent bid for the White House.

Uber CEO Travis Kalanick made an appearance as a guest of The Atlantic. Why? Nobody really knows.

Whatever witchcraft Dockery has employed to look this good in yellow would be worth it's weight in gold for ghost-toned women (like myself) the world over.

The gals from Broad City arrived together, unsurprisingly. What was remarkable was their apparent lack of Clinton swag.

Known by many for his role as sleeper agent Sergeant Nicholas Brody on Showtime's Homeland, Lewis is currently appearing in Billions, where he plays a hedge fund manager who isn't complaining about the current banking regulatory atmosphere.

As a guest of USA Today, she'll be sitting with Rosario Dawson, Neve Campbell, and others. The steadfast proponent of women's rights around the world sometimes flies under the radar, but that doesn't mean that this strong survivor shouldn't be recognized for her advocacy work.

Raven-Symoné, guest of ABC News, showed up rocking a tight semi-shaved haircut and an avant-garde take on a tuxedo.

Wrestler John Cena was also in attendance at the Hilton. He definitely brought the "hustle" tonight!

Pretty much all of the principal actors from Shonda Rhimes' political drama Scandal were in attendance this evening, courtesy of the ABC network, which airs the program. Goldwyn wins a bunch of internet points for bringing his daughter along as his date.

I don't know. Maybe someone important is a Cowboys fan.

More like this
Watch Benedict Cumberbatch Lead An ‘SNL’ Medieval History Lesson On Roe v. Wade
By Grace Wehniainen
Celebrities & President Biden Are Enraged By The Leaked Roe v. Wade Decision
By Alyssa Lapid
Playing A Scrub Nurse On 'Grey’s Anatomy' Made BokHee An Instagram Royalty
By Brad Witter
'Unforgotten's Brand New Character Joins At A Pivotal Moment For S5
By Bustle UK
Get Even More From Bustle — Sign Up For The Newsletter