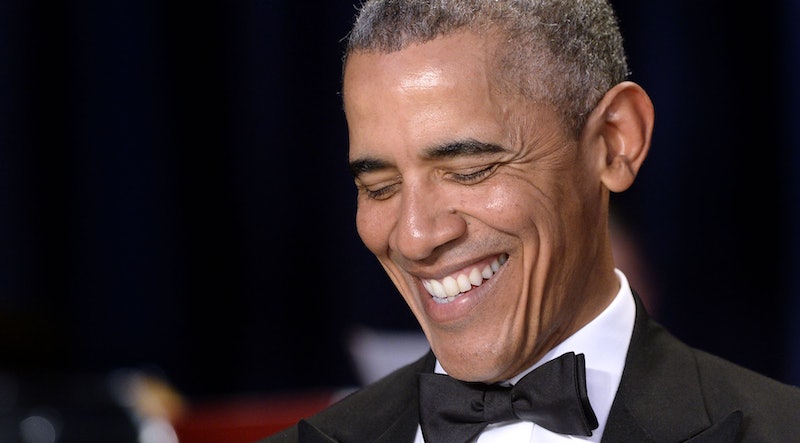 Starting off with footage from Obama's first victory speech at Grant Park in downtown Chicago, the video reel goes on to show POTUS' lighter side — and I'm not just talking about his hair, which even Obama admitted in his ensuing speech had aged over the years. (He also showed photos of himself and Michelle through the years, pointing out that Michelle looks achingly young and gorgeous in each one, and finished on a shot of Michelle with a skeleton in a tux. I see what you did there, POTUS.)

The audience was in titters throughout, enjoying Obama's unique way with words, seeing photos of the First Family throughout the years, and reliving the ups and downs of his historic presidency, from "Israel is a strong friend of Israel's" to Obama knocking things over during press conferences.

Like pretty much every basketball shot he missed, most of the goofy dances that were captured on camera throughout the past eight years.

You can check it out courtesy of C-SPAN here, starting at 1:40.

More like this
What Is Barack Obama’s Net Worth? He Makes *Way* More Now As An Ex-President
By Hugh McIntyre
10 Times Diana & Meghan Spoke Similarly On The Royal Family
By Sophie McEvoy
Yes, Billboard Queen Angelyne Really Ran For Governor Of California
By Brad Witter
Kim Kardashian Remembers Her Last Words To Death Row Victim Brandon Bernard
By Jake Viswanath
Get Even More From Bustle — Sign Up For The Newsletter