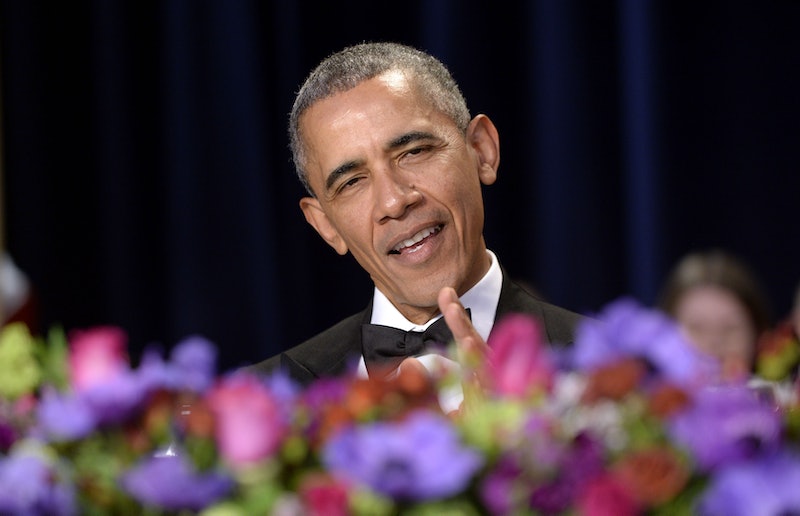 After what felt like hours of red-carpet arrivals and watching important people in fancy gowns eating their dinner, we finally got to see President Obama's last-ever White House Correspondents' Dinner speech — and nobody enjoyed that swan song more than Obama himself, whose laugh-out-loud speech included a "Couch Commander" segment, a cameo from Boehner, well-timed digs at Donald Trump, and an unforgettable "Obama-out" mic drop to end his WHCD speech.

“With that, I have just two more words to say," Obama said, finishing a speech that had delighted the crowd, "Obama Out."

With that, Obama held two fingers to his lips, lifted the mic, and physically dropped it. He left the stage, symbolically leaving an eight-year presidency that had been marked by, along other things, his second-to-none comic timing. His final speech offered the crowd a not-so-subtle Clinton endorsement-slash-prediction — suggesting that his replacement would be a "she," and the pronoun speaking volumes — as well as several well-intentioned jabs towards Clinton.

And, of course, Obama didn't hold back when it came to Donald Trump. "Is this dinner too tacky for The Donald? What could he possibly be doing instead? Is he at home, eating a Trump Steak, tweeting out insults to Angela Merkel?" he asked, rhetorically. He also added that Trump "has spent years meeting leaders from around the world." Pause. "Miss Sweden, Miss Argentina, Miss Azerbaijan..."

Obama was out for blood, and the crowd ate it up.