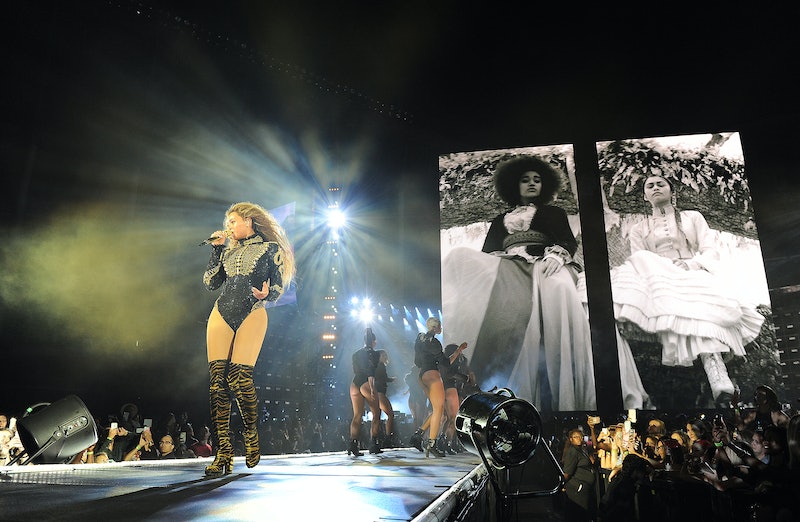 Beyonce has been all everyone's been talking about since she dropped her visual album Lemonade last week for our eyes and ears to feast upon. It's such a hot topic right now that Larry Wilmore referenced Beyonce and Lemonade during the White House Correspondents' Dinner on Saturday night. The Nightly Show host served as emcee of the Washington, D.C. event, which was held at the Washington Hilton, and he mentioned not only Bey in his remarks, but Wilmore also joked about "Becky with the Good Hair."

He started off with just a Beyonce joke, though. "Fox News actually tried to convince America that Beyoncé is anti-cop after her Black Panther-inspired performance at the Super Bowl," Wilmore said at the podium. "Anti-cop? Come on. At most, she's anti-pants." The room erupted in laughter at the comment, showing that even a room filled with media and politicos could also be part of the BeyHive. Wilmore continued and naturally referenced Lemonade: "I think Fox News secretly likes Beyoncé. They just renamed The Kelly File to 'Becky With The Good Hair.'" For those who aren't aware, "Becky with the good hair" is a much-debated and investigated lyric from the song "Sorry" on Lemonade. The internet has been buzzing about the lyric for a week, the meaning of which is much more complicated than just being about someone named Becky, and now Wilmore is getting in on the game.

It's official: Beyonce and Lemonade have permeated all aspects of life, even political events like the White House Correspondents' Dinner. This shows there's really no stopping Lemonade and we shouldn't even try. President Obama may be commander-in-chief, but Queen Bey reigns everywhere. No election needed.

More like this
What Is Barack Obama’s Net Worth? He Makes *Way* More Now As An Ex-President
By Hugh McIntyre
Cardi B Explains To David Letterman Why She Uses Her Star Power For Politics
By Jake Viswanath
President Zelensky Spoke Out On Ukraine's Chances Of Hosting Eurovision Next Year
By Sam Ramsden
Britney Spears Thanks Fans After Miscarriage & Explains Why She's Writing A Book
By Jake Viswanath
Get Even More From Bustle — Sign Up For The Newsletter