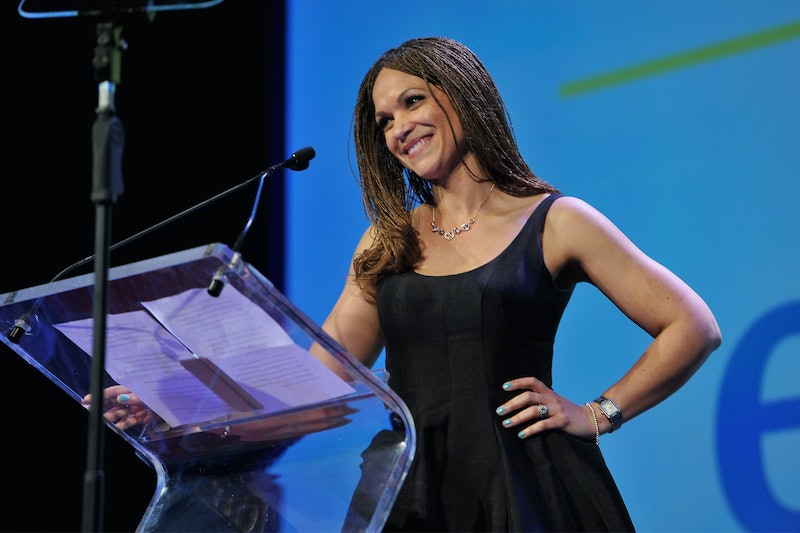 At Saturday night's White House Correspondents' Dinner, Melissa Harris-Perry had an epic response to Larry Wilmore's observation that MSNBC "now stands for 'Missing a Significant Number of Black Correspondents" on Twitter that really stands best on its own.

But first: some background. Harris-Perry, the Presidential Endowed Professor of Politics and International Affairs at North Carolina's Wake Forest University, parted ways with the cable network earlier this year after an email that she had written to her staff and crew went viral.

In the email, she memorably said, "I am not a token, mammy, or little brown bobble head," and accused the network of sidelining her show during the election season coverage. (The network has adamantly denied this.) Her program had suffered from schedule adjustments during breaking stories, but according to Harris-Perry, she felt like her bosses weren't being upfront with her about the real reason for the bumps, which they have denied.

However, Harris-Perry said that it wouldn't be the end of her career as a journalist, stating in the memo: "I am not hungry for empty airtime. I care only about substantive, meaningful, and autonomous work. When we can do that, I will return — not a moment earlier."

So, here's her very own mic drop moment from this year's White House Correspondents' Dinner. Timely, relevant, and featuring another wonderfully outspoken woman of color, MHP proves that when life gives one lemons, one should be making lemonade.

Harris-Perry's followers on the social media site jumped in to side with the professor and former cable news anchor to show their support.

It remains to be seen when Harris-Perry will once again grace the screens with her presence, and unique perspective, on a regular basis. For now, her work can be found in The Nation, as well as on Elle.com, where she recently stepped on board as an editor-at-large earlier this month. In her new role, she plans on focusing on intersectional issues that define the experiences of many women and girls, especially women and girls of color.

More like this
Celebrities & President Biden Are Enraged By The Leaked Roe v. Wade Decision
By Alyssa Lapid
23 Abortion Funds In States With Trigger Bans To Donate To
By Emma Carey
What Is Barack Obama’s Net Worth? He Makes *Way* More Now As An Ex-President
By Hugh McIntyre
Watch Benedict Cumberbatch Lead An ‘SNL’ Medieval History Lesson On Roe v. Wade
By Grace Wehniainen
Get Even More From Bustle — Sign Up For The Newsletter