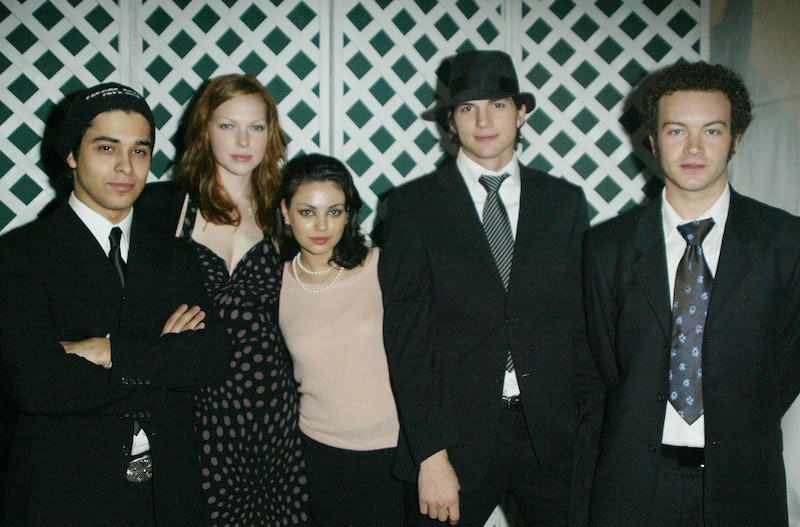 We've all heard the same story: the cast of a TV show is the best of friends, but once the show ends, the members never see each other again. Listen, I get it — some people are just work friends, and some people you put up with just because you work with them. Actors aren't exempt from that just, but, I think I can safely say I know a TV cast who definitely never lied about being friends: that of That '70s Show. On Sunday, Danny Masterson posted a That 70's Show cast reunion picture on his Instagram, and it proves that the gang is most definitely still "all alright" after all this time.

The reason this reunion sticks out among all the others (there have been many '70s Show reunions over the years) is that it wasn't a typical cast get together. Mila Kunis, Laura Prepon, and Wilmer Valderrama were all there in order to show support for Masterson and Ashton Kutcher's new Netflix show, The Ranch, and Valderrama said as much in his own Instagram photo. Said Valderrama, "Me & the girls came to support our Bros @dannymasterson & @aplusk for the taping of their season finale of #TheRanch #Season1."

On an even sweeter note, Entertainment Tonight relayed that Masterson recently told the site that he had been hoping to get the '70s Show crew back together in order to do cameos on The Ranch. It looks like that's a real possibility now, at least judging by this photo, and I, for one, couldn't be happier about seeing the gang all in one place.

While I selfishly wish the reunion included the group getting into someone's car and passionately singing the That 70's Show theme song, this particular picture meant a lot more in the scheme of things. It shows that the cast supports one another no matter what, and the caption in the picture posted by Laura Prepon that reads, "Family #that70sshow," with two beating heart emojis, is enough to prove that this friendship rooted in teenage shenanigans, bellbottoms, and fringe is the real deal.

Now, if you'll excuse me, I have a certain show to get reacquainted with. *Chants from a distance* "Hello, Wisconsin!"