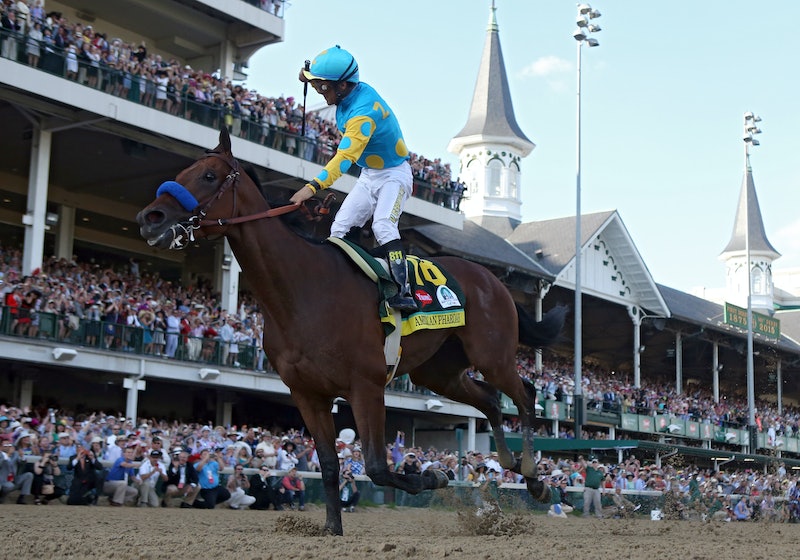 The roster of jockeys set to ride in the Run For The Roses was finalized Sunday with Emisael Jaramillo named to ride Majesto, and once again the lineup for the annual horse race is all-male. The lack of female jockeys in Kentucky Derby 142 shouldn't come as a surprise. Women are often absent from the race's lineup. In fact, despite the number of women participating in horseracing off the track, female jockeys make up only 10 percent of riders in the sport overall. So, what's kept women from taking the reigns more often at Churchill Downs in Louisville, Kentucky?

Female trainers and horse owner have been fairly commonplace at the Kentucky Derby since the 1940s, but it's a different story when it comes to jockeys. In the race's nearly 142-year history only six women have ridden in the race, and none of them have ever won.

On top of an impressive list of accolades, Napravnik was also an outspoken critic about the misogyny still present in horse racing. In a 2013 profile on 60 Minutes, Napravnik talked about the challenges she worked to overcome while blazing trails for other women in the sport. "There are still owners and trainers that don't want to ride a female. The only way that I deal with that is...to try to beat that person in a race," Napravnik said, adding she'd been told to "go home and have a baby, go home and stay in the kitchen" by spectators and fellow jockeys.

Horse racing's extremely competitive nature could also contribute to the fewer number of women riders. Jockeys who are forced (or elect) to take time off due to injury (or say pregnancy) find themselves quickly replaced.

The horses will break out of the gate at Churchill Downs for Kentucky Derby 142 on Saturday and although there won't be any female riders in this year's Most Exciting Two Minutes In Sports there are women in horse racing well deserving of respect and admiration. Perhaps their accomplishments will inspire more young women to saddle up in the sport's higest levels of competition.