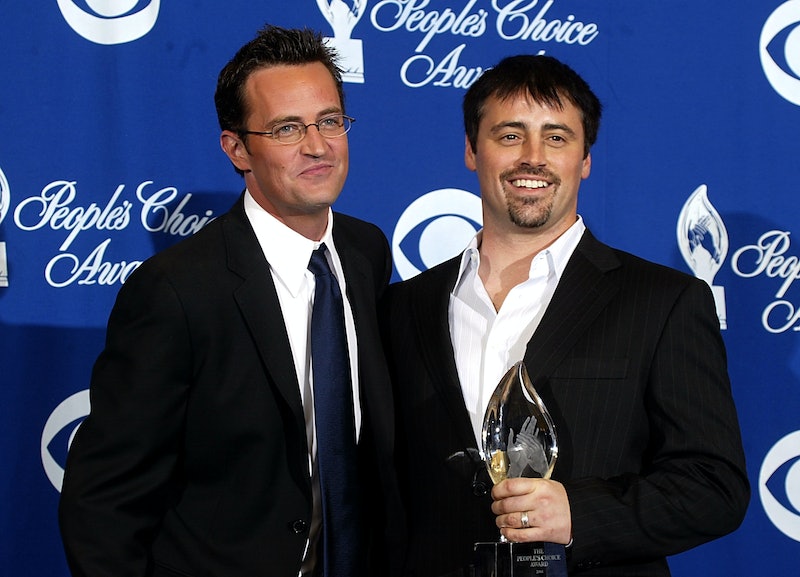 Other TV roommates have come and gone, but there hasn't been as dynamic of a duo since Friends' Chandler (Matthew Perry) and Joey (Matt LeBlanc). The characters from the '90s NBC sitcom were loyal pals who supported each other through thick and thin, and that bond seems to have extended to real life, too. Recently, Matthew Perry and Matt LeBlanc had a mini- Friends reunion, and it's so great to see these two are as close in real life as they were in the show. On May 1, LeBlanc posted a pic of himself and Perry to his Instagram with the caption, "Went to see The End [of] Longing last night and ran into this dude. He and the cast were great. Way to go bro."

The End of Longing is a two-act play that Perry wrote and stars in at the Playhouse Theatre in London's West End. It marks Perry's playwriting debut, and it follows a group of four fortysomethings searching for meaning, per its official description. In it, Perry plays Jack, an alcoholic photographer, and although Perry hasn't said if the part is based on anything true, the actor does have experience with alcoholism; the star recently told BBC Radio 2 that he doesn't remember filming three seasons of Friends due to his past substance abuse, which took place during his years on the show. "Somewhere between Season 3 and 6," he said of the time when he was using alcohol and prescription drugs. "A little bit of the time, I was a little out of it, yeah.”

It's well-known that Perry struggled with addiction during his years on the sitcom, but he has since gotten sober and seems to be doing incredibly well, starring on The Odd Couple and creating The End of Longing. It's great to see Perry's Friends co-star LeBlanc come out to support him and his new play. Earlier this year, the Friends cast (minus Perry) reunited at an event to honor director James Burrows and LeBlanc told moderator Andy Cohen, "There’s one missing. We wish he was here. Matty, we miss you." Since the show ended back in 2004, the six famous stars have gone their separate ways, but it's always so fun to see them support each other in their new endeavors.

And if you're a Friends obsessive fan like me, you may remember all the times that Chandler complained about going to see Joey's plays on the show. Well, this time Joey went to go see Chandler's play, and the duo couldn't seem happier about it. How's that for full circle?