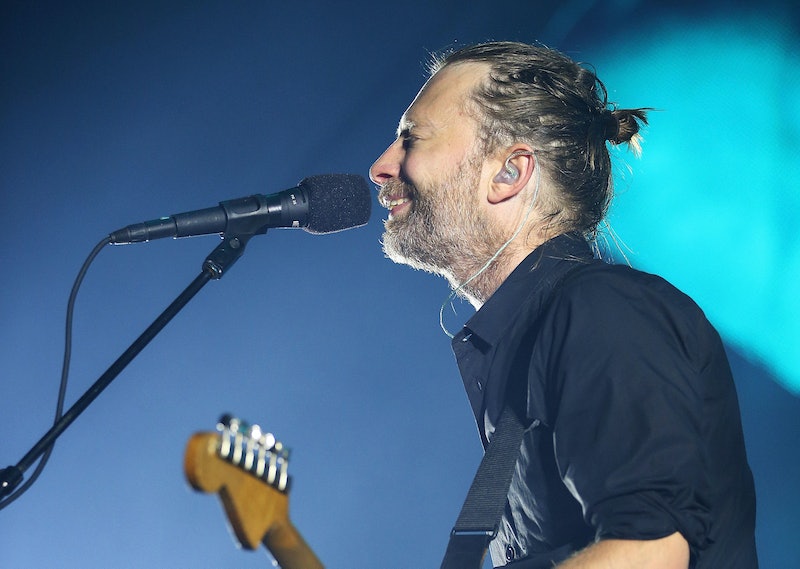 In what might seem like a counterintuitive move to promote an upcoming album, Radiohead has deleted its social media and faded its website to white. On Sunday, May 1, around the same time that some fans received a leaflet apparently teasing the upcoming Radiohead single "Burn The Witch," some Redditors noticed that Radiohead's website was slowly fading away, losing opacity as the minutes passed. It is now blank, and that's not the only way that the band has basically erased its web presence. Both the band's and frontman Thom Yorke's tweets are now deleted, and their avatars are as blank as the website. Radiohead's Facebook and Google Plus accounts have been similarly wiped. So what does it all mean?

This stunt is widely believed to be a promotion for the band's upcoming ninth album. Radiohead has not confirmed this, nor have they said anything about the album that most fans believe will arrive very soon. The band's manager has teased a June release date, and Radiohead has scheduled tour dates around the country as well as founded a new company, an act that has preceded their previous two albums. An album coming soon seems likely, but it's pretty hard to tell what the band has up their sleeves.

Many fans didn't expect deleting their social and web presence to be the band's next promotional move, but it actually makes some sense considering Radiohead's history. The band has typically played with traditional formats in its music, releases, and multimedia, and its members have often expressed a degree of phobia for anything trendy or insubstantial, while always in pursuit of the modern. Eschewing the usual stream of Instagrams and tweets for snail mail seems, in some ways, like the most obvious move Radiohead could make.

Silence itself seems to be a new marketing strategy for more acts than just Radiohead. Beyoncé, who many would consider to be worlds away from Radiohead, rarely gives interviews, and she used silence to spectacular effect before the surprise release of 2013's Beyoncé. As Lemonade has confirmed, silence has not hurt her career in the slightest; in fact, it has made her fans hungrier for the personal details she chooses to reveal on her own curated terms. Perhaps because of Beyoncé, surprise albums are now so common that they seem a little passé, but no one questions that when it comes to celebrities, silence has power.

In a time when it's common for most artists to have regularly maintained social media accounts, conspicuous silence offers a way to stand out. While some stars, like Kanye West, have used the unfiltered possibilities of constant posting to promote their work and build up anticipation, it makes sense that some artists would trade ubiquity for silence. And if any artist is poised to lead the charge, or perhaps the retreat into the cordless caves, it's Radiohead.

More like this
Taylor Swift, Kerry Washington & More Speak Out On Uvalde Mass Shooting
By Jake Viswanath
Halsey Calls Out Label For Asking Them To "Fake A TikTok Moment" For New Song
By Jake Viswanath
Britney Spears Thanks Fans After Miscarriage & Explains Why She's Writing A Book
By Jake Viswanath
7 Gun Control Advocates To Follow On Twitter
By Madhuri Sathish-Van Atta
Get Even More From Bustle — Sign Up For The Newsletter