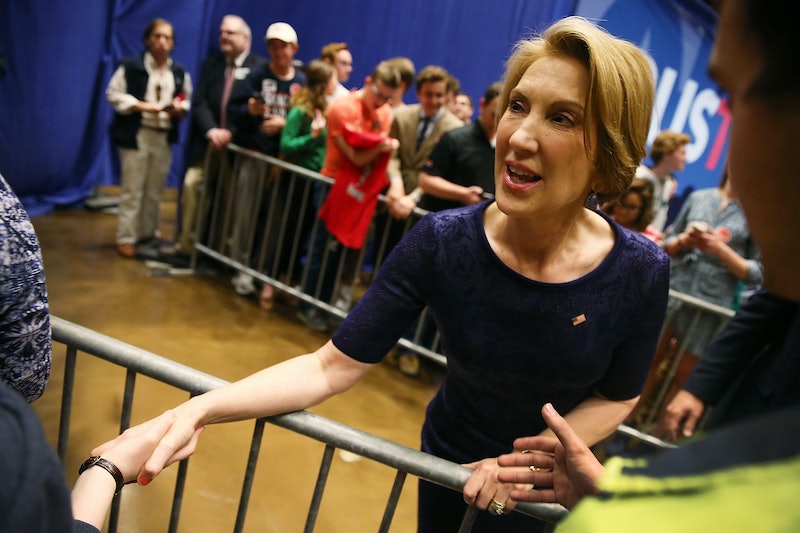 Ted Cruz has attempted to rejuvenate his struggling presidential campaign by preemptively naming Carly Fiorina as his running mate. However, he’s still badly trailing Donald Trump in delegates, and in all likelihood, he won’t become the GOP’s presidential nominee. This raises an interesting question: Could Carly Fiorina be Donald Trump’s vice president, even though she’s currently running with Ted Cruz?

In a technical sense, yes. When Cruz picked FIorina to run on his ticket, he wasn’t taking any formal or official action within the Republican Party. He was simply announcing that if he does win the nomination, he intends to choose Fiorina for vice president. But she isn’t actually his running mate yet — she couldn’t possibly be, because Cruz isn’t yet in the position to choose a running mate.

As it stands, “Cruz-Fiorina” still just a possibility, not a reality. And if Cruz ends up losing the nomination, there’s no rule that would prevent Fiorina from becoming Trump’s running mate. There are, however, plenty of other reasons why a Trump-Fiorina ticket is unlikely to happen.

For one, Trump would have to offer her the position, and he probably won’t do that. Sure, Trump has an incentive to choose a woman as his running mate, as that could theoretically help him overcome his massive unpopularity with women voters (The key word is “theoretically” — I’m very skeptical of the idea). Nevertheless, Trump has already said that he wants “a politician” on his ticket, as opposed to somebody from a business background, and that would seem to rule Fiorina out.

Even if Trump offered Fiorina the VP slot, it seems highly unlikely that she’d accept it. She’s been the target of sexist attacks from Trump before, and has hit him back harshly in response. So harsh, one might argue, that it would be borderline impossible for her to pull an about-face and pretend that she’s suddenly on board with The Donald.

Here are some of the things Fiorina has said about Trump during the campaign:

Politicians flip-flop all the time, but those are really hard statements to walk back. Fiorina, if she became Trump’s vice presidential candidate, would be spending most of her time on the trail explaining why she was running with an unprincipled leader who’s no different from Hillary Clinton and doesn’t represent the Republican Party.

On paper, at least, Fiorina seems like a decent enough running mate. But she is not going to become Donald Trump’s running mate. Frankly, I'd be surprised if she even campaigned for him in the general election.