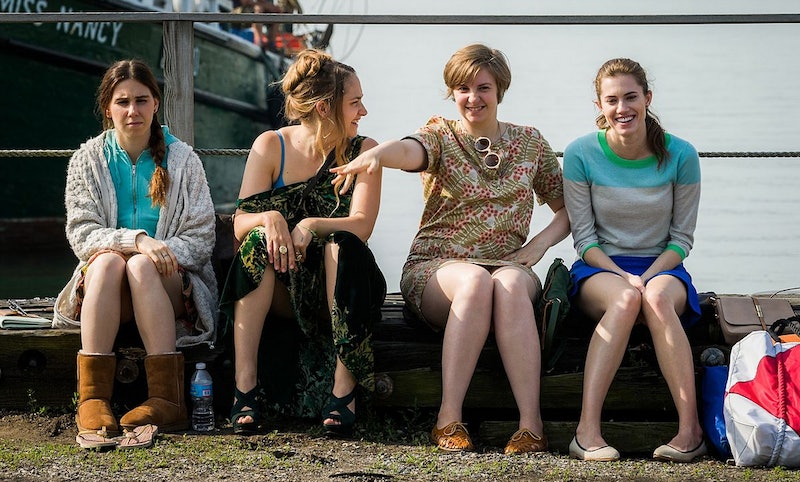 If you watched last night's episode of HBO's Girls, there are likely two scenes still seared in your memory: That climactic fight, and the dance that immediately preceded it. Both were rather epic, and the latter was rather fun. In fact, it was the kind of fun that made you want immediately arrange such an experience between you and your friend (with all the whimsy and none of the cruel stuff that came afterward). Now HBO's obliged out dreams by releasing a video explaining the choreography to the Girls "Beach House" dance. Bless.

The video comes starring Celia Rowlson-Hall, who choreographed the routine we saw performed by Hannah, Marnie, Jessa, Shoshanna, and Elijah and his buddies jammed to in the beach house. The dance comes in eleven parts (the first part is called "Shoulder, Shoulder, Surprise!", the last one called "Swing & Flop, Step, Touch, Chug"), and you can see Rowlson-Hall performing the dance side-by-side with the footage from the episode.

Rowlson-Hall is also the woman behind the delightful choreography seen in Lena Dunham's Vogue video. You know the one: It's the one in which Dunham and Vogue editor-at-large Hamish Bowles dance adorably in pursuit of the perfect pose.

If Dunham ever feels the need to hire an in-house choreographer for her every day needs, I would like to nominate Rowlson-Hall for the honor.

The Vogue choreography, for good measure: