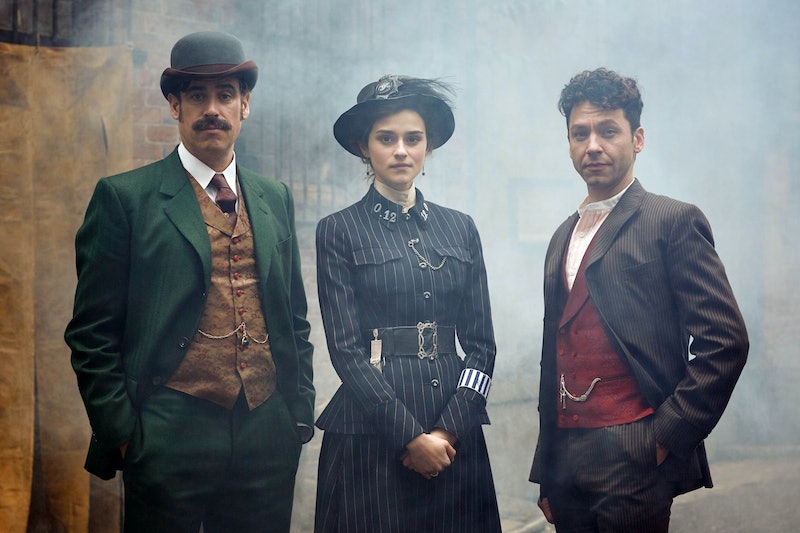 The title characters in the new FOX mystery-drama Houdini & Doyle are two well-known historical figures from the early 20th century — magician Harry Houdini and author Sir Conan Arthur Doyle. In the show, they will join forces with the Scotland Yard to investigate cases that possess elements of the supernatural. For example, in the premiere episode, they are called to investigate the murder of a nun at a Magdalene laundry. Who's the prime suspect? A young woman who has been dead for six months. It's safe to assume that aspect is fictional, but did the Magdalene laundries really exist? The answer is disturbing on numerous levels.

Not only were the Magdalene laundries very real, but (shockingly enough) the last laundry didn't close its doors until 1996. In 2013, a BBC report described the laundries as "Catholic-run workhouses" that held approximately 10,000 women between the years 1922 and 1996. The young women sent to the laundries were deemed "troubled" or "fallen" and they were forced to perform manual labor for no pay while incarcerated. Many of the inmates were described as "unmarried mothers, women with learning difficulties and girls who had been abused." The Guardian reported that half the inmates were under 23 years old.

The laundries were founded in Ireland and named after the Bible's Mary Magdalene, but they eventually spread to England, where Houdini & Doyle takes place. According to a 2011 report by The New York Times, the laundries received little attention until the early 1990s:

The story of the Magdalene women was uncovered in 1993 when a religious order in Dublin cashed in on the booming Irish property market and sold a portion of its land to a developer. The bodies of 155 women who had died in the laundry were exhumed from unmarked graves and the media began to ask questions.

The same New York Times article reported that the Catholic Church's strict rules about sex meant that many women were sent to the laundries for the "sin" of having a child out of wedlock — despite the fact that a large number of these pregnancies were the result of rape and incest. Other inmates were sent to the laundries for petty crimes, "flirtatious" behavior, and mental disabilities. The outlet went on to state that the women worked extraordinarily long hours for no wages and the laundries' survivors (many of whom are now in their 70s and 80s) reported being physical, verbally, and sexually abused while incarcerated.

This isn't the first time the laundries have been given onscreen treatment — In 2002, Peter Mullan's critically-acclaimed film The Magdalene Sisters raised public awareness about the institutions. The film focused on four women, one of whom spoke out after the film's release. Mary Norris told The Age :

"Those places were the Irish gulags for women. When you went inside their doors you left behind your dignity, identity and humanity. We were locked up, had no outside contacts and got no wages, although we worked 10 hours a day, six days a week, 52 weeks a year. What else is that but slavery? And to think that they were doing all this in the name of a loving God! I used to tell God I hated him."

In 2013, Sky News reported that Irish Prime Minister Enda Kenny had formally apologized to the victims and described the laundries as "the nation's shame." He also vowed that the surviving victims would receive monetary compensation, welfare needs, and psychological counseling. Irish Parliament, along with 20 survivors, gave Kenny a standing ovation after his heartfelt and tearful apology. Sky News quoted survivor Maureen Sullivan, who was sent to a laundry at age 12, as saying: "[Kenny] really did us proud. Now we can go on with our lives and we know that we've got an apology, and he's taken responsibility. It's just fantastic."

Sullivan's outlook is admirable, because it's clear that the girls and women who were held in the laundries endured horrific indignities.