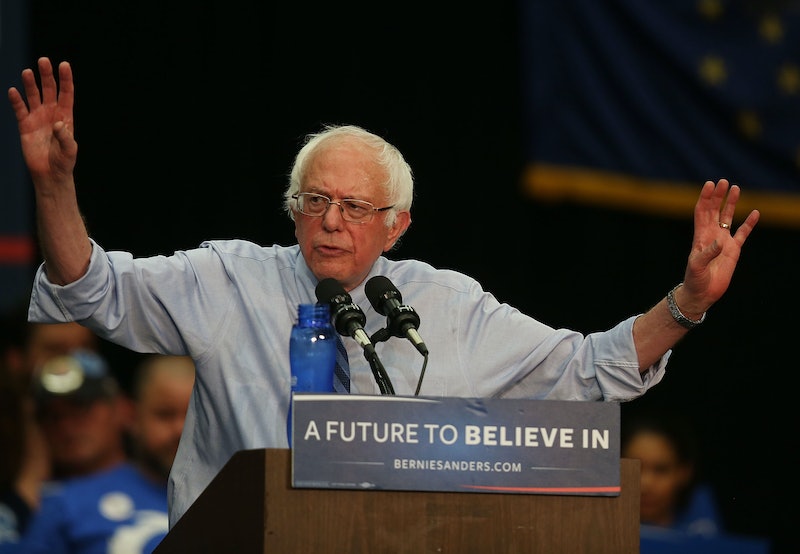 To start with, Sanders seems to define "contested convention" differently than most. Usually, the term refers to a convention at which no candidate wins a majority of delegates during the first ballot of voting, thus requiring multiple ballots to determine a nominee. Sanders predicted that there will be a contested Democratic convention because Hillary Clinton "will need superdelegates to take her over the top at the convention in Philadelphia."

But let's set that bit of semantics aside for a moment. Is Sanders right that, using the traditional definition, Democrats will have a contested convention?

Probably not. Here's the current delegate and superdelegate count on the Democratic side, courtesy of The New York Times.

A Democrat needs 2,383 delegates to become the nominee, which means that Clinton must win 200 delegates in the remaining primaries in order to avoid a contested convention. That's easily within reach; there are still 1,020 pledged delegates up for grabs. Clinton only needs to win 20 percent of them, which she could do even if she lost in every single state from here on out.

Of course, this math assumes that all of Clinton's superdelegates will stay loyal to her. But what if they defected? Then, would a contested convention be likely?

Let's game it out. Sanders has received about 43 percent of the popular vote so far, so for the sake of argument, let's give him 43 percent of Clinton's superdelegates. If that happened, their totals would look more like this:

Even in this scenario, Clinton would have a pretty good shot at winning an outright majority of delegates. She'd only need to win 424 in the remaining contests to clear a majority. Because Democrats allocate delegates proportionally, that would translate to an average of 42 percent of the vote. Well, she's won 57 percent of the vote in the primaries on average so far, so clearing 42 percent in the remaining primaries isn't a very high bar.

And let's not ignore the polls, either. The biggest remaining delegate haul is California, which will award a whopping 475 pledged delegates when it votes in June. Clinton has led Sanders in every California poll this cycle. Even if he narrowly defeated her in the Golden State, thanks to proportional allocation, Clinton would still walk away with roughly half the delegates she needs to clinch the nomination. Clinton is also the favorite in Indiana (83 pledged delegates) and New Jersey (126 pledged delegates).

The bottom line? Clinton has performed well enough in the primaries that she can easily survive a mass defection of superdelegates, a serious drop-off in her vote share in the remaining contests, or both. It's still mathematically possible for Democrats to have a contested convention, but no honest reading of the numbers could conclude that there's a high probability of this happening. In all likelihood, Clinton will have a majority of delegates when Democrats meet to vote on a nominee.