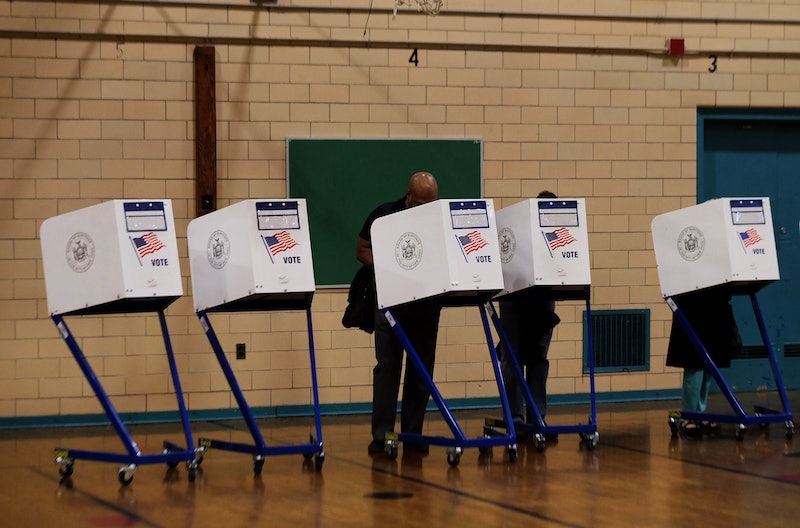 Tuesday's primary results in Indiana could be huge for the Republican party. Donald Trump could pave his path to the nomination or the party could head to the convention with little clue as to who will be the nominee. Indianans must have waiting down to a science since during the last two primary cycles their race has been one of the last. But for the rest of you, it can be hard to stay patient waiting for the results. Luckily you won't have to wait long — the Indiana primary ends at 6 p.m. local time.

The state splits two time zones — Eastern and Central — so the final counties will end voting at 7 p.m. ET, although the vast majority of the state's counties can start counting at 6 p.m. ET. This is earlier than we've seen in a number of the recent contests along the Eastern seaboard, so you will probably be able to find out the results before prime time television kicks off for the evening. Of course a close finish in either race could throw a wrench in this plan. Polling has been a bit erratic, but seems to be coming together for the two frontrunners.

Hillary Clinton enjoys an average 6-point lead over Bernie Sanders. Trump's lead over Ted Cruz and John Kasich is even more pronounced; at the time of writing, the Donald has a 15-point lead in the latest poll and averages more than 17 percent. Cruz and Kasich split the rest of the likely Republican voters, despite their "alliance" that was meant to give Cruz an edge in an attempt to hold back Trump. Unless there's a major poll-defying upset, clear cut exit polls should make the race rather easy to call.

The Indiana Secretary of State Election Division will be posting the preliminary results on its webpage. You can break things down by county too, if you want to check which part of the state Trump is faring better in. Indiana is a winner-take-all state, but the delegate allocation is split between the at-large delegates and the congressional districts. Trump would have to come in first in both categories to sweep the state's 57 delegates.

Clinton and Sanders similarly will be facing off in the state's congressional districts, but since the Democratic delegates are awarded proportionally, it's less dire for the candidates to have support that stretches to every corner of the state. Also, Clinton has more wiggle room to clench the nomination than Trump does. She only needs to win about 37 percent of the remaining pledged delegates to have a majority.

Take advantage of Indiana's early finish and use the time you'd otherwise spend watching CNN to make your own delegate predictions for the rest of the race. Split up California until the wee hours if your heart so desires. As the primaries wrap up, you'll have less and less time to ponder any options that don't include Trump and Clinton.