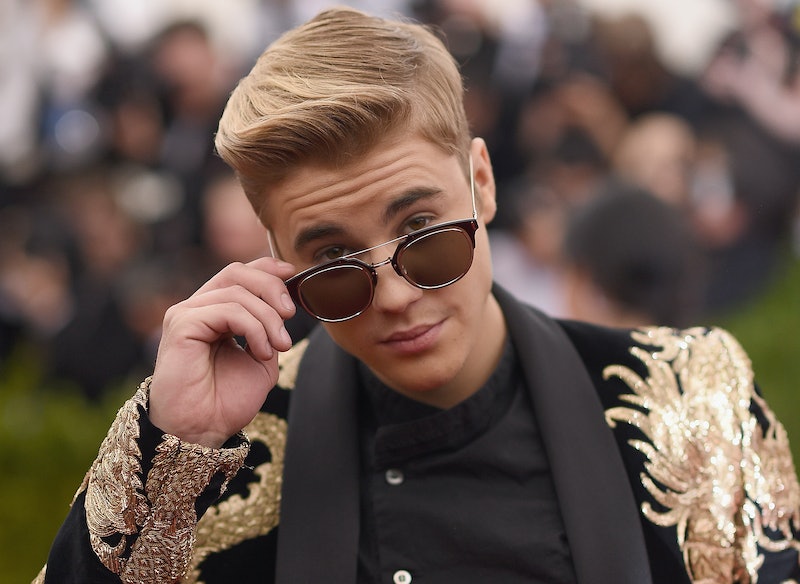 OK Justin Bieber fans, lay aside the hot goss on whether or not the Biebs will run into his former boo-thangs and make things weird on the Met Gala's red carpet: He didn't even show up. Without the drama, only one question remains: Where was Justin Bieber at the 2016 Met Gala?

Admittedly, it was pretty fun to speculate that Bieber might run into not only Selena Gomez, but his other former love Hailey Baldwin, at the event. Baldwin and Gomez both showed up (separately, of course), but Bieber was nowhere to be found. This fact is especially disappointing when you consider his previous Met Gala looks. In 2015, he wore a gorgeous brocade blazer that fit his personality and the theme "China: Through The Looking Glass" perfectly. He looked so good that we almost forgot he used to have a pet monkey. Almost.

Love triangles and abandoned monkeys aside, Bieber was definitely missed at this year's gala, themed "Manus x Machina: Fashion In An Age Of Technology." While he surely would have worn some kind of metal coat, or maybe even his own version of Zayn's robot arms, there wasn't even a whisper of the Biebs on site. Here's a glimpse of his smooth look in 2015.

So where could he have been this year? It's hard to know for sure, but we do have some clues to work with.

Here he is, performing at the Radio Disney Music Awards, a mere 24 hours ago. Perhaps he didn't have time to put his robot outfit together.

2. He Was Topless Three Hours Ago

As you can see from his Instagram, Bieber preferred a more natural look than the theme of the 2016 Met Gala called for.

3. His Fans Are Looking For Him

One thing is certain: When you can't find Bieber, look to his fans for answers. Clearly, they miss him as much as I do.

Wherever he was, it's definitely a disappointment that he didn't make an appearance at the gala tonight. Don't worry, Justin: It's not too late now to say sorry.

More like this
Selena Gomez Reacts To TikTok Users Who Say She Shaded Hailey Bieber
By Grace Wehniainen
Doja Cat Wore Surrealist-Inspired Schiaparelli To The BBMAs
By Dominique Norman
14 Spicy Bralette Outfits For Vaxed Girl Summer, Round 2
By Avery Matera
5 Mini Skirt Outfits To Wear, Inspired By These Brave Souls
By Avery Matera
Get Even More From Bustle — Sign Up For The Newsletter