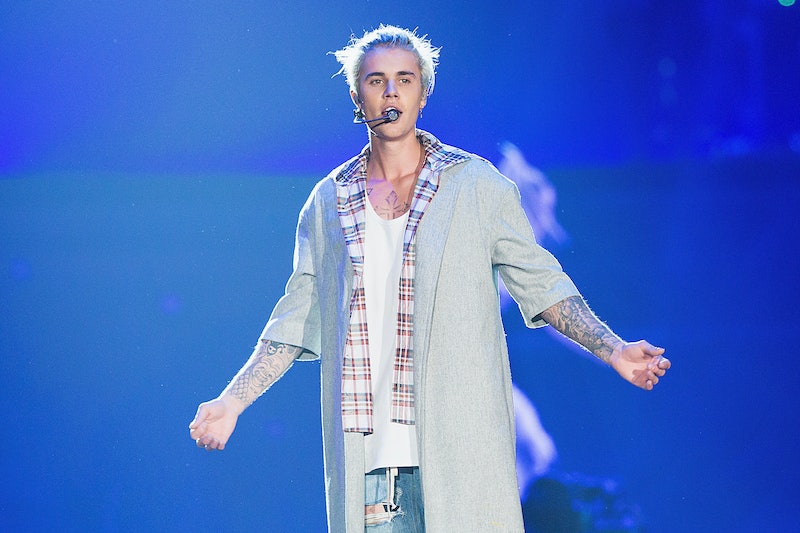 Over the weekend, in the midst of 'gramming pictures of Taye Diggs and Bill Nye the Science Guy, Justin Bieber posed for a photo with a tiger at his father Jeremy Bieber's engagement party that subsequently had PETA up in arms. The controversial animal-rights group wasted no time in coming for Justin, who shared the photo of himself petting the chained tiger on Instagram. The organization sent the singer an open letter that included a NSFW video of a tiger being brutally whipped by the owner of the same zoo that this tiger supposedly came from.

"Justin Bieber is lucky not to have had his throat torn out by this stressed captive tiger," PETA senior vice president Lisa Lange told the UK's Daily Mail in a statement. The messaged continued,

Tigers used for photo ops are torn away from their mothers shortly after birth, and the Bowmanville Zoo, in particular, was caught whipping one tiger more than 17 times, even after the cat was lying on his back in a position of submission and fear. This is why PETA urges everyone to stay far away from cruel and dangerous big-cat photo ops and also why we're asking Justin to vow that this will be his last time promoting these types of abusive outfits.

While PETA's anger is understandable, the blame here seems to be misplaced. After all, the person they should be admonishing is whoever chose to have the tiger at the party; Justin was merely a guest. And while PETA would argue that the singer should have known better than to pose for a photo with the tiger, I'd argue that one would think that an animal deemed "safe" enough to attend a party with tons of party guests is one who would not lash out at a human getting that close to him. (That being said, perhaps Justin should've known better than to post the photo of himself petting a chained-up tiger. The reaction to that is only going to be controversial, and he has so many followers that it's really not a great influence to have on, especially young, fans.)

Though PETA is known for its outlandish ads and publicity stunts — and, in turn, may not necessarily be the best way to advocate for animal rights — I don't disagree with them in this situation. Why anyone would choose to have a chained tiger at their engagement party is beyond me, and it truly does seem unnecessary in an attempt to be ~unique~ and ~edgy~. I just think that going after Justin Bieber, a relatively innocent partygoer in this instance, was the wrong choice. Instead, PETA should have taken up the issue with whoever threw the party.

Bottom line: Having a chained wild animal at your engagement party is never a good idea.

Bustle has reached out to Jeremy Bieber for comment on having the tiger at his party, but has not yet heard back.