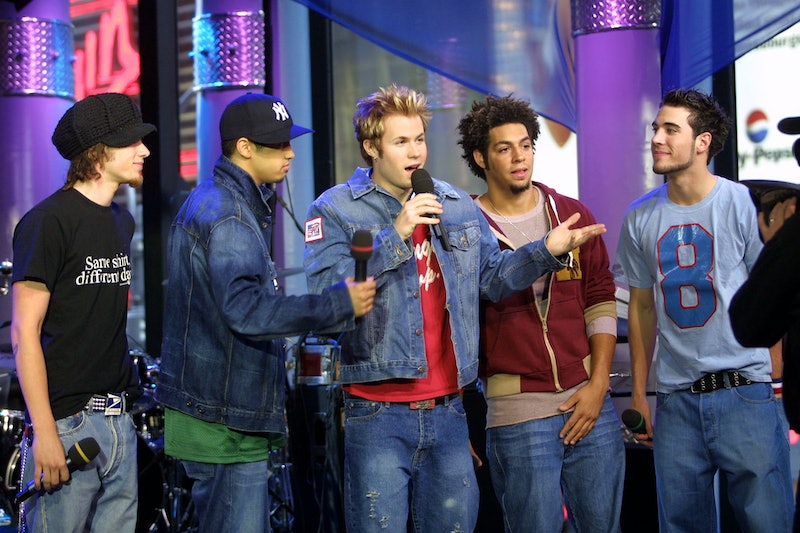 This isn't something I ever thought I'd be saying in 2016, but did you guys check out the rider for O-Town's MY2K tour? Even though I don't recall dusting off my choker necklaces or climbing into a time machine, I seem to have found myself in the early 2000s, because O-Town is going on tour this summer with 98 Degrees, Dream, and Ryan Cabrera and TMZ obtained the "Liquid Dreams" band's rider. Seriously, this is giving me major flashbacks. I feel like I should be signing yearbooks and making summer camp plans, but then I look down and remember, oh right, I'm a fully grown adult, it's just the world that's doing a flashback to my teen years. Also how long have I been asleep for and did I pay my taxes?

Those are questions for another time, though, because in this moment, we need to talk about O-Town's reported rider for their tour. First of all, it's delightful, because it proves they're excited as we are about the fact that they're back, as evidenced by all the nostalgic items they're allegedly requesting for the stops along the way. The whole list feels like a celebration of the '90s in all of its glory, and it couldn't be more perfect that a boy band from the late 1990s and early 2000s are the ones throwing the party. So let's take a look at all the things that your boys Erik-Michael Estrada, Trevor Penick, Jacob Underwood, and Dan Miller (miss you, Ashley Parker Angel) are reportedly requesting for the road, and try to decode exactly what they plan to do with these things.

According to the TMZ report, the band needs this "to play their sweet cassette collection," but it's also a great way to stay connected to their roots. Because who doesn't have memories of trading mixtapes with your friends because your car didn't have a CD player. No? Just me and O-Town? That's cool.

The boys reportedly want this item in order to "play GoldenEye," but I'm sure they also meant to shout out Mario Kart and The Legend of Zelda: Ocarina of Time, the two best games in the history of the world (I will legitimately fight you on this ranking).

The local beer is to remind themselves that they aren't underage anymore, I'm betting. Angel is only 34 now, so he wouldn't have been 21 when the band started touring in the late 1990s. Sometimes the passing of time can be a great thing.

To keep each other humble? This one is a little baffling. Maybe for juvenile pranks to keep each other feeling young even while they're adulting hard by drinking craft beers. Just to keep things evened out.

If there's one thing you learn when someone leaves your boy band, it's to not rely too much on anyone besides yourself. It's great to have bandmates, of course, but if everyone else bails and there's just one guy left on tour, at least he knows he can scratch his own back. Independence!

TMZ reports that the guys requested these items "for the stray cats the band takes in while on the road," which I really, really hope isn't a gross reference to women, but I'm going to bury that thought in my mind. I don't wanna talk about it.

This "rider" does sound a bit like a joke, but as long as that cat thing isn't a euphemism, I'm kind of hoping it's all very, very real.