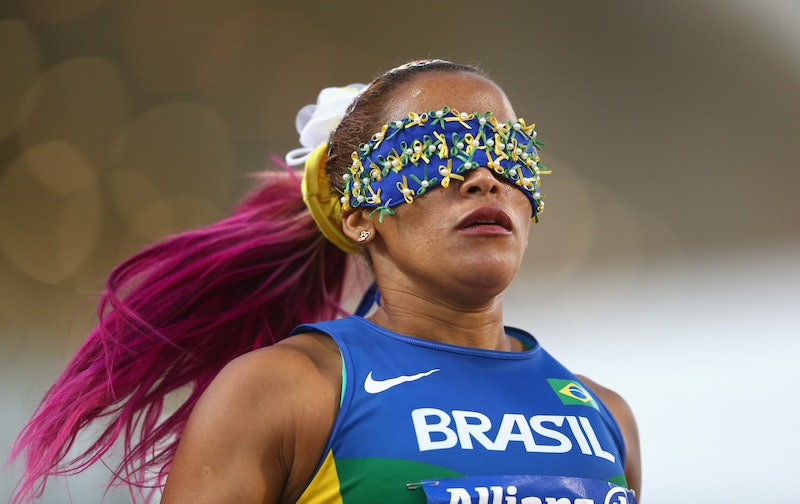 The Paralympics are coming to Rio de Janeiro this year (from September 7-18), and you better be prepared to see some badass disabled female athletes taking the stage. They might not get the same attention as able-bodied athletes (though I do not understand why), but they definitely deserve your attention, because their stories are often as massively impressive as their achievements. In our brief selection here, we have a war hero, an former taekwondo champ turned wheelchair archery champ, and a blind sprinter who can keep up with Usain Bolt. It's enough to make you feel lazy as hell, frankly.

The history of the Paralympics has always involved women. The very first Paralympic event, held in 1948 on the same day as the mainstream Olympics opening ceremony, involved both men and women, all in wheelchairs competing in archery. (In comparison, women weren't allowed to participate in the "regular" Olympics until the second Olympiad in 1900, when a mere 22 women out of nearly a thousand athletes were allowed to compete in five sports.) And these days, we've got female Paralympians who started winning gold at 13. Basically, if we're talking gender equality, female athleticism, or just out-and-out kicking ass, you need look no further than the cohort lining up to get Paralympic glory.

So learn these names; they'll be splashed everywhere come September, and you'll want to look in the know when people start proclaiming them their new heroes. If you knew them already, keep watching, because this is going to be good.

Yu Chui Yee, born in Hong Kong, is more commonly known as Alison, and she's one of the most elite Paralympians China has ever produced, specializing in wheelchair fencing. After surviving bone cancer at the age of 13 with a partially amputated leg, she's been taking the sport by storm for years, racking up a whopping seven gold medals in various Paralympics, plus a few silvers and bronzes just to vary things a bit.

As with various other Paralympians, she was initially training in another sport entirely (swimming, as it happens), before she was lured over to fencing -- largely, she's said, because the outfits were elegant and she was promised many handsome boys. Whatever her motivation, she's since completely smashed it, and is looking to be one of the big hopes for China's Paralympic campaign, while also being gently weird. She wears a stone from space on her neck during competition, believing it gives her "power from another planet." Whatever helps get the gold, right?

What were you doing at age 13? Ellie Simmonds is here to make you look bad. She was winning gold medals at the 2008 Paralympics. Yep, "medals," plural. Simmonds, who has achondroplasia dwarfism, crashed onto the scene in her early teens to dominate swimming, where she specializes in short sprints and casually racking up world records. (If it makes you feel better, Simmonds celebrated her 2008 wins by bursting into tears.)

Simmonds is a household name in the United Kingdom, where she was born, largely because she swam rings around the competition in the London 2012 Paralympics, coming away with a haul of two golds, a silver, and a bronze. She managed to break eight world records before she turned 18, and will be coming to the Rio event at the ripe old age of 21. She makes prodigies look tired.

When Usain Bolt wants to run with you as your guide and has faith you're going to keep up, you know you're one of the fastest women alive. Terezinha Guilhermina can run 100m in 12 seconds, and requires a guide to do it because she happens to be nearly blind. She's one of the most famous Paralympians alive for a reason. The Brazilian won swathes of gold medals, and ten World Championship golds as well, and has dominated her sport for an entire decade. And she tends to decorate her blindfold with ornate designs so that she stands out, just in case streaking ahead of the pack wasn't enough.

Guilhermina grew up in a poor household, and only became an athlete when her sister allowed her to borrow her sneakers for a running event, as the family couldn't afford to buy two pairs. Thank heaven for generous sisters.

Zahra Nemati isn't just an excellent athlete (though her haul of gold medals indicates she's not exactly a slouch); she represents an historic moment for her country. When she won gold in women's archery from her wheelchair at London 2012, she became the first Iranian woman (Olympian or Paralympian) to win gold

. Nemati was catapulted to world fame immediately, and is looking to repeat the feat in Rio 2016.

It could have been very different. Before the car accident that paralyzed her, Nemati was a championship taekwondo black belt, but her spinal injury forced her to change direction. A mere six months after taking up the sport, she got the bronze at the National Championships (against able-bodied archers, no less).

Melissa Stockwell made her name in the news long before her Paralympic career began. She was the first female American soldier to lose a limb in the Iraq conflict. Her left leg was amputated after a bomb exploded under her Humvee as she traveled through Baghdad in 2004. Stockwell's since made her name as a Paralympian, in not one but three sports. That's one hell of a comeback.

Initially, Stockwell, who was a gymnast as a kid, focused on swimming (and made the Paralympic team), but she's since become a triathlete, combining swimming, cycling, and running. And it's gone swimmingly: She's won gold at multiple World Championships and is coming into Rio as a heavy favorite. She's also on the Wounded Warrior Project board, in case you thought she had any spare time.

More like this
Starbucks' Summer Menu Includes A New Chocolate Cream Cold Brew
By Emma Garza
How To Fight For Reproductive Rights, Based On How Much Time You Have
By Courtney Young
The Music Industry Continues To Fail Black Women
By Precious Adesina
Chelsea Woody On Shattering Stereotypes In Surfing
By Leah Groth
Get Even More From Bustle — Sign Up For The Newsletter