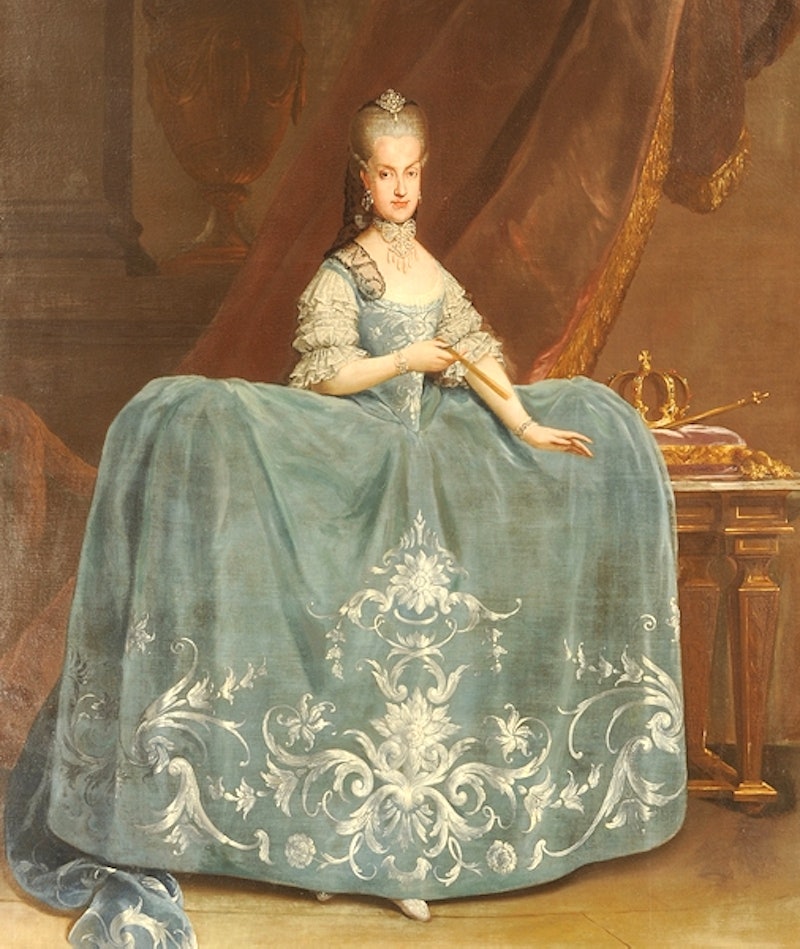 Feminism is, when it comes to fashion, a bit of a strange marriage. Some theorists think that things like high heels and tight skirts, which are partially constructed for a male gaze and ideal models of female sexuality while restricting movement, aren't feminist; others (me included) believe that femininity, constriction, corsetry, and other "ladylike" fashions can be empowering, subversive, and emblematic of female choice and control. (Note that I say "can be," not "always are"). But we're in an age when female power over dress and body is an actual issue, and things haven't always been like that. For a lot of human history, there was considerable interest in fashionable clothing for women that fundamentally prevented them from acting like, well, normal humans. And, unlike us, they weren't really presented with a choice.

I'm defining "unfeminist," here, as clothing specifically designed to limit the movement and freedom of the female gender. There were ridiculous, immobilizing trends throughout history that applied to both genders (like the giant wigs of the 18th century in Europe), but they don't qualify because of their focus on both men and women. (The most famous un-feminist clothing item in history, the chastity belt supposedly worn by medieval women, is now thought to be a Victorian hoax, so I haven't included it.)

And there's another element that needs to be understood: restriction often wasn't seen as a bad thing. In fact, in many societies ridiculous clothing was actually a class message: the more constricted you were, in fanciful and unwieldy clothing, the less likely it was that you did manual labor of any kind. If you could barely move, you were claiming high status, or showing off your femininity and virtue. Some women willingly hobbled themselves, in some cases literally; a particularly strange trend in England in the 1860s was the Alexandra Limp, where fashionable women copied the dragging leg of their style icon Queen Alexandra.

Where could we start except for here? Corsetry, the squeezing and tight-lacing of the upper body (and sometimes the hips too) into an ideal shape depending on the trend of the time, was an expected practice for women across Europe for at least two centuries, from the 1600s to the late 1800s. If you've ever been laced into a corset tightly, you'll understand that the restriction on movement and even breathing were considerable. They were incredibly popular and went through many different phases and arrangements, from whale or ivory boning to short "stays" or bra-like things and loose girdle arrangements, but they were all focused on reshaping women into an "ideal" shape, often through contortion and discomfort.

However, scholars now believe that the boning of corsets didn't cause disease or malformed organs, as was commonly believed; it's much more likely that they were responsible for spinal problems and general posture issues, "squishing," and an inability to move properly. Which is, you'll agree, enough of a problem on its own.

These three varieties of hoop skirt all come under the same heading of "violently impractical and definitely problematic". When a woman is so encumbered by everyday fashion that she has no choice but to put a wooden or cane construction under her skirts to hold the weight of them away from her body, you know you've reached peak ridiculousness. The trio of hoop skirt varieties were all developed to solve the health hazard of carrying heavy skirts purely by oneself, but they caused their own serious difficulties in movement and hygiene.

Panniers, named after the side satchels on horses, extended on either side, while crinolines and farthingales could be in the shape of "wheel-drums," cones, or circles. Mobility, crushing weight on the hips, and overall incapacity make these some of the most extraordinarily debilitating creations for women in fashion history. And it wasn't just about weight; heavy petticoats could become unhygienic from repeated use, and satirists made fun of the possibility of heavily-hooped ladies getting caught, set on fire, or stuck in factory equipment. At least you could comfortably hide several dogs under your skirt if you wanted, though.

Foot binding lasted in Chinese tradition for several hundred years, and the pain that accompanied the practice must have been astonishing. The smaller the foot, the better; the Victoria & Albert Museum in London has shoes for aristocratic ladies with "lotus feet," as they were called, that are barely inches long (under three inches was the ideal). Foot binding began in childhood, where the foot was broken and folded under itself to create a miniature stump. The practice may have been derived from the apparent belief that hobbling a woman increased the strength of her thighs and pelvic muscles for sexual reasons, and the shoes given to bound women were not intended to be walked on, since anybody in that position could not support themselves easily for more than a few minutes. They're like terrible, brutal baby shoes.

Chopines were the original platform shoes, and they make today's '90s-rehash models look like child's play. The medieval Spanish and the Chinese can both claim to originate the practice, but it was in 16th-century Venice that the chopines became so extreme as to actually endanger the lives of the women who wore them.

Chopines in Venice appear to have originated with prostitutes who wanted to mark themselves out among the population, but they escalated, literally; a model survives at a whopping 20 inches high. Women in those shoes would only be able to move with the support of servants at either side. The chopines of noblewomen were incredibly elaborate, delicate things, but they weren't meant to be seen; they were an excuse to wear enormously long dresses that hid the platform underneath.

If you've ever had an urge to be completely unable to run, try on a hobble skirt. The idea allegedly originated with Paul Poiret, the French designer who claimed in 1908 that he had "freed the bust [but] shackled the legs," though that origin is disputed. Instead of corseting the top, hobble skirts corseted the legs from the thighs to the knees or even ankles, producing a diminutive gait and an utter inability to move freely in any direction. Their name came from the practice of "hobbling" horses by tying together their front legs to prevent escape, and indeed, hobble skirt wearers also sometimes wore ropes or guards under their skirts that bound their legs to prevent them taking too large a step and tearing the garment. You looked exceedingly delicate but were likely, at any moment, to fall over.

This particular example of restrictive clothing is a classic bit of class-elected fashion. In other words, the women who wore the bliaut in 11th to 13th-century Europe were electing to do it to show their elite social position, because when you were wearing one, you couldn't do anything. (Some men wore it too, but it seems to have largely been a female garment.) Its notable feature was long sleeves that trailed extravagantly (and heavily) down to the floor, rendering the wearer unable to do manual work, go near anything that might stain the fabric, move easily, or conduct any actions beyond small movements of the hands. They were inconvenient and utterly mental, and you can bet the women who had them wore them with distinct pride (if also a lot of irritation when they couldn't move).

People really will do anything for fashion.