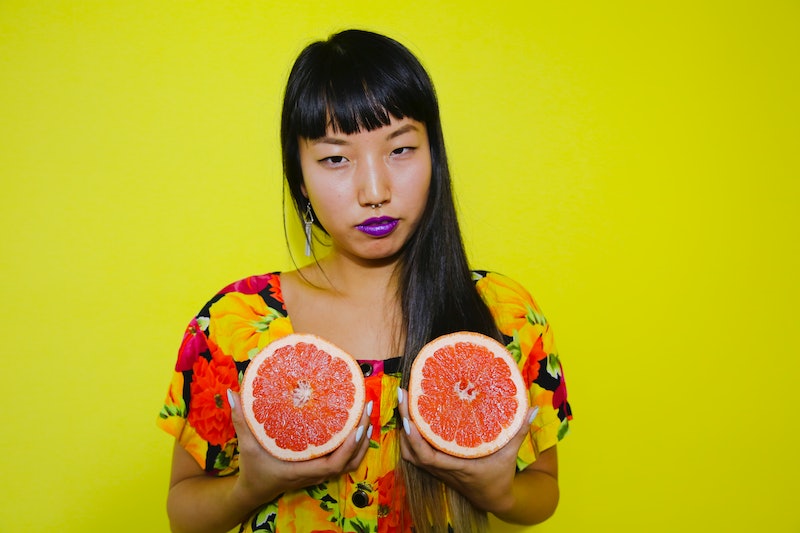 Women worry a lot about their breasts, and not just whether one is way bigger than the other — one study showed that 16 percent of all women between 40 and 69 have seen a doctor about their breasts at some point within a ten-year period. One suspects that most of those visits were motivated by our fear of breast cancer, which makes sense: about 12 percent of all U.S. women will get breast cancer at some point in their lives. And while there's new hope in treatment — just today, it was revealed that scientists had mapped the genetic events that cause breast cancer — it's still a very scary thing. But though cancer is often the only breast-related issue we think of, there's more to breast health than cancer alone; that's why being aware of the five symptoms below are so important.

Self-awareness is a crucial part of being a breast owner. It's like having a dog; you have to take care of 'em properly and make sure they're healthy. Part of this care is performing regular self-exams — and if you've never done a self-exam before, get yourself to a mirror this evening and have a poke around. If you're uncertain about the proper steps to take, the non-profit Breastcancer.org has an excellent guide to the different angles and approaches you should take to do a full check. (No, it's not just fondling yourself a bit after taking a bra off — there's a technique involved.)

But just rubbing your ladies down one a month isn't all there is to breast health. Barbara Levy MD, Vice President of the American College of Obstetricians and Gynaecologists (ACOG), told Bustle:

“Women know their own bodies better than anyone. That’s why ACOG recommends breast self-awareness, which is defined as women’s awareness of the normal appearance and feel of their breasts. We recommend this concept because more than 70 percent of cases of cancer in women younger than 50 are detected by women themselves. Breast self-awareness can certainly include self-examination, but it’s more than that. It’s knowing your body and reporting any changes to your health care provider.”

So for good breast health, do regular checks of both the look and feel of your breasts, and keep a watch for these symptoms. They may signal an issue that needs a doctor's attention.

Macmillan Cancer Support points out that most breast lumps aren't malignant; they're either fluid-filled cysts or a fibroadenoma, a growth which forms when a milk gland within the breast becomes encased in tissue. Fibroadenomas (which are very common among young women) are often very small and have one peculiar characteristic: they'll move around pretty easily inside the breast when you touch them. Lumps can also be caused by mastitis, where a milk duct becomes infected, or by trauma and bruising. If you've over 40, the problem could also be fibrosis, which occurs when your breast tissue becomes very sensitive to hormonal shifts and is prone to developing benign cysts. Basically: if you find a lump, calm down and get it checked out.

Let's get something straight: if you've had inverted nipples all your life, I'm not suggesting you should run to a doctor in a panic about them now. Inverted nipples are quite common, and one estimate holds that between ten and 20 percent of all women have them from birth (or, at least, puberty and breast development). Also, nipple inversion is relatively common if you're pregnant, so don't panic unnecessarily if they suddenly go inwards when you've got a bun in the oven.

If they suddenly invert for no apparent reason, though, it is right to be concerned and get yourself checked out. The Mayo Clinic lists it as one of the primary signs that may indicate breast cancer, so you'll likely be sent for a mammogram or possibly a biopsy if they discover anything interesting on first examination.

Nipple sensitivity and dryness can actually be caused by a huge number of factors, many of which are environmental and thus easily changed. But it can be difficult to track what's actually behind it all (or in front of it, as it were), and specific kinds of irritation can come from different things.

The dreaded jogger's nipple is likely not something you can overlook; it's basically a friction injury caused by the nipple's movement against fabric during exercise. (Friction from sex can do the same thing, interestingly enough.) But there are other factors that might be in play with an irritated nipple, from an allergic reaction to a substance in your clothing or soap (yep, nipple dermatitis is a thing) to hormonal sensitivity.

In extremely rare cases, nipple itching and flaking could be linked to Paget's disease, but don't make that diagnosis for yourself using WebMD or something; use unscented moisturizer to help the dryness and go get a professional check-up.

The Cleveland Clinic points out that breast pain can be caused by a wide swathe of conditions, from the obvious to the more surprising. If you've got boob pain, it could be a sign of anything from an infection (mastitis, our old friend!) to bruising, but it may also be caused by pain in your chest wall, which can feel as if it's actually coming from your breasts. Breast Cancer Care mentions pulling a muscle in your chest as one kind of chest wall pain that can masquerade as a breast problem; gallbladder stones can also cause chest pain, despite the fact that your gallbladder is not located anywhere near your boobs. Sneaky, sneaky.

And frankly, sometimes your breasts hurt because they are shaped in a certain way. Harvard Health identifies "heavy, pendulous breasts" as a cause of breast aches, because they strain breast tissue. It turns out that pain could also be caused by medications, or even arthritis of the back; it's a mysterious beast and it might take time to get to the heart of what is causing it. (Unless somebody's recently punched you in the boobs, in which case we likely have a winner.)

There are many different kinds of discharge that can come out of your nipples; some of it shouldn't phase you, but there are a few specific kinds of nipple discharge that you should worry about. Basically, if it's coming from one nipple, rather than both; if the discharge leaks on its own, without needing you to touch your breasts; or if the discharge is unusually colored or has blood in it, you need to be concerned. But current research indicates that bloody discharge itself is likely caused by one of two non-cancerous conditions: intraductal papilloma and duct ectasia. So while bloody discharge can mean cancer, these two are the more likely culprits.

Both issues are disorders of the milk ducts, which are the parts of your breasts that carry milk to the nipple for nursing. An intraductal papilloma is basically a tiny, benign tumor that blocks a milk duct, causing annoyance, pain and bloody discharge, while duct ectasia is the shortening and widening of the ducts with age, occasionally creating blockages (and an inverted nipple, sometimes). Neither are life-threatening or even boob-threatening; they'll require operations to solve, though, so you need medical intervention.