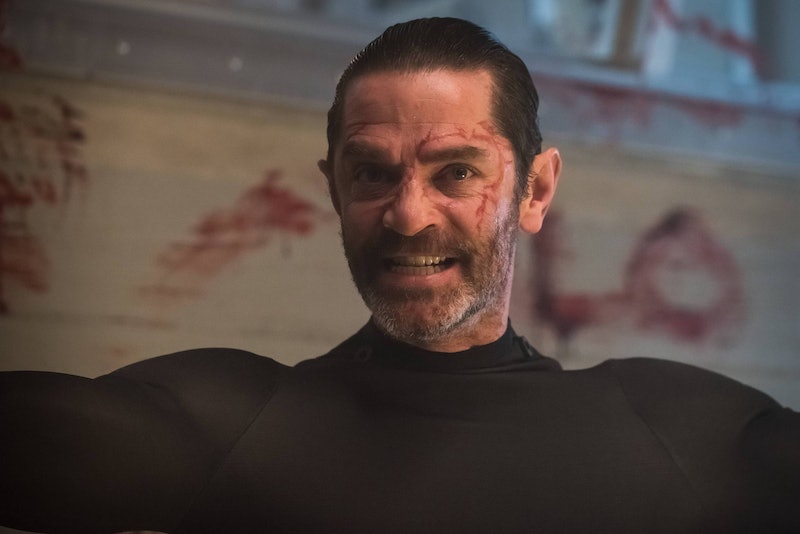 Gotham promised more villains in Season 2 and, boy, has this show delivered. Between continuing the storylines of Oswald Cobblepot and Edward Nygma, introducing the Galavan siblings Theo and Tabitha, and slowly revealing all the mysterious goings on with Hugo Strange and his experiments, the city of Gotham has a serious villain problem — one that Jim Gordon can't face on his own. Especially since soon there will be a new villain on the scene. So, who is Azrael on Gotham from the DC Comics and what should we expect from his addition to the "Wrath of the Villains" storyline?

First off, it should be noted that a couple of different characters have taken up the mantle of Azrael in the DC Comics, including Michael Lane and Jean-Paul Valley who are the most well-known iterations of the villain. However, no matter the name of the man wearing the suit, Azrael has always been a religious assassin employed by the Order of St. Dumas — after they brainwash him and train him to kill, of course. Azrael doesn't necessarily have any superpowers, but the villain is skilled in hand-to-hand combat and is often associated with a flaming sword, or pair of swords, so you can bet he knows how to use it.

Now, as for the version of Azrael we're going to see on Gotham, the villain has obviously undergone some changes in the adaptation process. Rather than introduce an entirely new character like Michael Lane or Jean-Paul Valley, Azrael is a reanimated version of Theo Galavan — remember how his body was mysteriously taken to a secret lab run by Hugo Strange? Of course, we've already seen the resurrection of Galavan, and Strange confirmed it was his first success in reanimating anyone (which opens the door for more villains to return on Gotham, but that's a discussion for another time).

However, a featurette on the upcoming episode "Wrath of the Villains: Azrael" offers us a hint of how the resurrected Galavan is transformed into Azrael: He's brainwashed by Strange into thinking he's an 11th century knight. We also see glimpses of Azrael training with a sword (that isn't coated with fire, but maybe they're leaving that for the episode itself) and his suit, presumably created by Strange. We also see that Azrael will be sent on a mission by Strange to kill Jim Gordon — though more because Gordon is a threat to Strange rather than revenge for Gordon killing Galavan.

So, does that mean we'll see an entirely new version of Azrael on Gotham? I suspect the answer is no. Although the mantle of Azrael may not be taken up by any of the characters who donned the suit in the comics, the villain seems to be sticking pretty close to the books. At least, Azrael will be the same in that he'll be a religious assassin given a mission by a mastermind with evil intentions. Still, it seems to be the mixture of comic book history with originality that Gotham has infused into most of its villains, which should provide for some creepy and exiting villainy.

More like this
What Does Doctor Strange’s Third Eye Mean?
By Arya Roshanian
Eleven Turns To An Unlikely Source To Regain Her Powers In Stranger Things 4
By Brad Witter
The Grey's Anatomy Season 18 Finale Finally Revealed If Japril Got Back Together
By Brad Witter
'Obi-Wan Kenobi' Takes Place After This Key Star Wars Movie
By Arya Roshanian
Get Even More From Bustle — Sign Up For The Newsletter