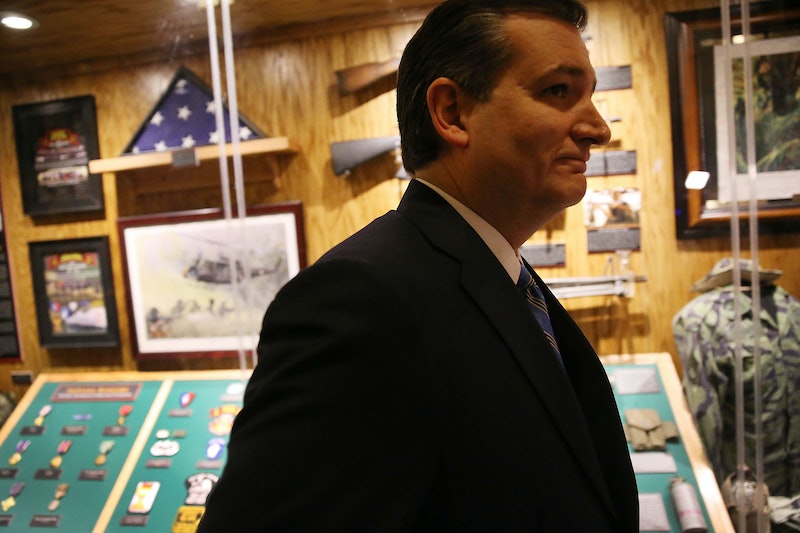 I know I've written and said this before, but the adage "politics makes strange bedfellows" may be the most fitting way to concisely describe the 2016 presidential election. It's a solid, throw-your-hands-in-the-air, I-give-up-trying-to-make-sense-of-this-circus response for when the election throws another strange "frenemy" curve ball, like Ben Carson endorsing Donald Trump and the quasi-alliance between John Kasich and Ted Cruz emerges. But could it be that the conservative Texas senator may actually see a political ally in John Oliver's "Make Donald Drumpf Again" brigade?

Granted, "ally" is probably too strongly positive of a term, but it does seem that Cruz happily approves of Oliver's brainchild. While campaigning in Indiana, Cruz was presented with a "Make Donald Drumpf Again" hat. Styled to parody the Trump's signature "Make America Great Again" hats, the item came from Oliver's larger segment aimed at explaining why many Americans think of Donald Trump as successful when there's a steaming pile of evidence that he is not. At all.

Oliver concluded that part of this veneer of success came from the sound of Trump's name and reminded viewers that the original Trump family name is, in fact, Drumpf. Although the segment was clearly tongue-and-cheek, it had the more serious aim of derailing Trump's run. As the arguable conductor of the anti-Trump train, Cruz seems to be a fan of the hats, at least from this Indiana encounter. When asked to autograph the "Make Donald Drumpf Again" hat during a diner campaign stop, Cruz chuckled and said, "Happy to," adding "Excellent. Thank you, sir."

It's pretty amusing to see Cruz approve of anything that comes from Oliver's Last Week Tonight. I am hard-pressed to think of too many common ground subjects for these two. After all, Oliver devoted a segment of Last Week Tonight to shredding Cruz and debunking his justification for not considering a Supreme Court replacement for Antonin Scalia until there's a new president.

Also, Oliver is an outspoken proponent of abortion rights and devoted a segment of his show to shining a light on onerous state restrictions. Meanwhile, Cruz has Troy Newman, a man who has advocated Americans to "execut[e] convicted murderers, including abortionists," as part of his Pro-Lifers for Cruz coalition.

I could go on and on about their differences, but I think it suffices to say you wouldn't expect a love fest between Cruz and Oliver. However, it seems the former may have at least a bit of an appreciation for the latter based on his reaction when presented with a "Make Donald Drumpf Again" hat. Whether more Hoosiers want to make Donald Drumpf again, as well, will be determined on Tuesday at the Indiana state primary.