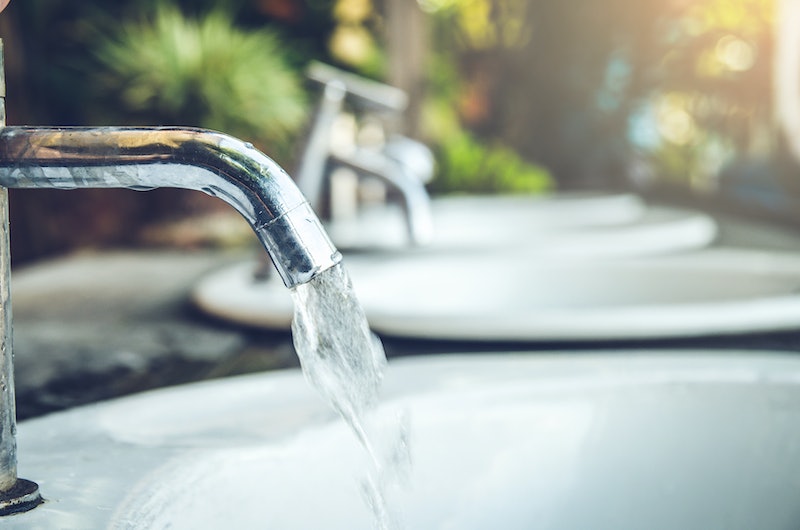 Do the sounds of dripping faucets or babbling brooks or gushing waterfalls make you run to the bathroom? You are not alone. Thanks to SciShow, we now have answers for why running water makes you have to pee. Just not solutions. So for all of you craving, like, a zen water fountain set-up in your bedroom for zen-ing out purposes — sorry, dudes. You may be out of luck.

SciShow is the brainchild of Hank Green (brother of John Green, YA whisperer) and Michael Aranda. It's a YouTube series dedicated to answering any weird "Why?" and "How?" questions the corners of the Internet think to ask. And this week they asked, "Why does running water make you want to pee?", because let's face it — we all want to know the answer to that one.

According to both psychologists and urologists (doctors who specialize in the urinary tract), states the video, the main factor at play here is the power of suggestion. We've all felt it, suggestion's pesky power — one minute you're fine, the next minute your mother says that that freckle of yours looks awfully like a mole and moles can mean cancer and now you're WebMD-ing "cancer freckle mole looks like???????" and hyperventilating. But in this case, no moms are involved — just the sound of running water:

Man, our lizard brains sure can be dumb sometimes — but at least there's a little more at play than simply, "Water sounds like peeing, so... yeah." Thanks to the ever-reliable power of suggestion, once you've established a routine of feeling like you have to pee when hearing running water, you begin to experience a conditioned response.

This type of unconscious association was most famously tested by Russian psychologist Ivan Pavlov, who experimented on dogs. For months, Pavlov would ring a bell, and then feed his dog a piece of meat. The dog began to associate the ringing of the bell with a treat, so much so that when Pavlov stopped providing meat following the ringing of the bell, his dog would still drool, due to his now-established conditioned response. Have you ever heard the term "Pavlovian Response?" It's this guy they were talking about.

We may act similarly, having associated running water with other bathroom sounds since the days of potty training.

While the concept of conditioned responses and having to pee hasn't been extensively studied, doctors do use the sounds of running water on a regular basis to help prostate patients and people with paruresis ("shy bladder syndrome"), um, do their thing.

So the next time that you try a new white noise soundtrack and end up being tortured by waterfall sounds, just remember: The power of suggestion! Pavlov's dogs! Conditioned response! Probably none of this will help but it's worth a shot!

More like this
6 Abortion Advocates To Follow On TikTok
By Sara Youngblood Gregory
How To Protect Your Digital Privacy If You Need An Abortion Post Roe v. Wade
By Kaitlyn Wylde
5 Crystals To Manifest Better Sleep
By Megan McCarty
Conversations With Friends' Endometriosis Scenes Are As Brutal As It Gets
By Ivana Rihter
Get Even More From Bustle — Sign Up For The Newsletter