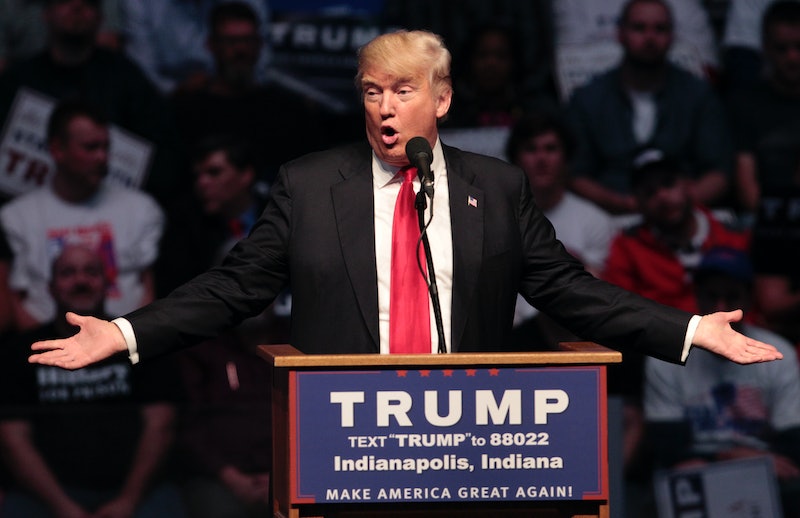 With the Indiana primary around the corner, Donald Trump has focused his campaign efforts on the Hoosier State for the past few days. After huge victories in the Acela primaries last Tuesday, his confidence is at an all-time high, while his inappropriate comments reached a new low when Trump referred to U.S.-China trade relations as "rape" while speaking at a rally in Fort Wayne on Sunday. "We can't continue to allow China to rape our country, and that's what they're doing," he said. "It's the greatest theft in the history of the world."

The GOP frontrunner has maintained a strong stance on China throughout his campaign — saying the country is "killing" the U.S. with its high number of exports — but got even more intense this weekend. While it's normal for a politician to have plans for foreign trade policies, the way Trump incorporated sexual assault into the discussion does not seem very presidential.

First off, rape is not something to joke about, or a word to casually interchange with others. Trump continuously makes crude and sexist comments, but slipping them into conversations about foreign relations and the economy proves that he really has no filter or limits for disregarding women's issues.

Trump has also come under fire recently for embracing the endorsement of former professional boxer Mike Tyson, who was convicted of rape in Indiana in 1992 and must register as a sex offender. Candidates who want to protect American women and stop sexual assault don't associate with convicted rapists or make analogies to rape in speeches unrelated to the issue.

Trump's mention of rape perpetuates the harmful notion that it's acceptable to joke about women being violently hurt, which subsequently sustains the belief that it's acceptable to violently hurt women. He has made his misogynistic views clear in how he speaks about and treats female reporters, celebrities, and politicians, so this only amplifies the unequal way he views half the population and the lack of effort he would put toward defending them as president.

During the same rally, Trump criticized his Democratic rival, Hillary Clinton, for not having the "strength or energy" to make America great again, as he promises to do. He's already been called out for sexist remarks that she's too weak to run the country, but that didn't stop him from questioning her physical strength in the same speech he referred to trade policies as "rape."

Some optimists hoped the Republican presidential hopeful would tone down his offensive rhetoric as he inched closer and closer to winning the GOP nomination. He seems to be doing the opposite.