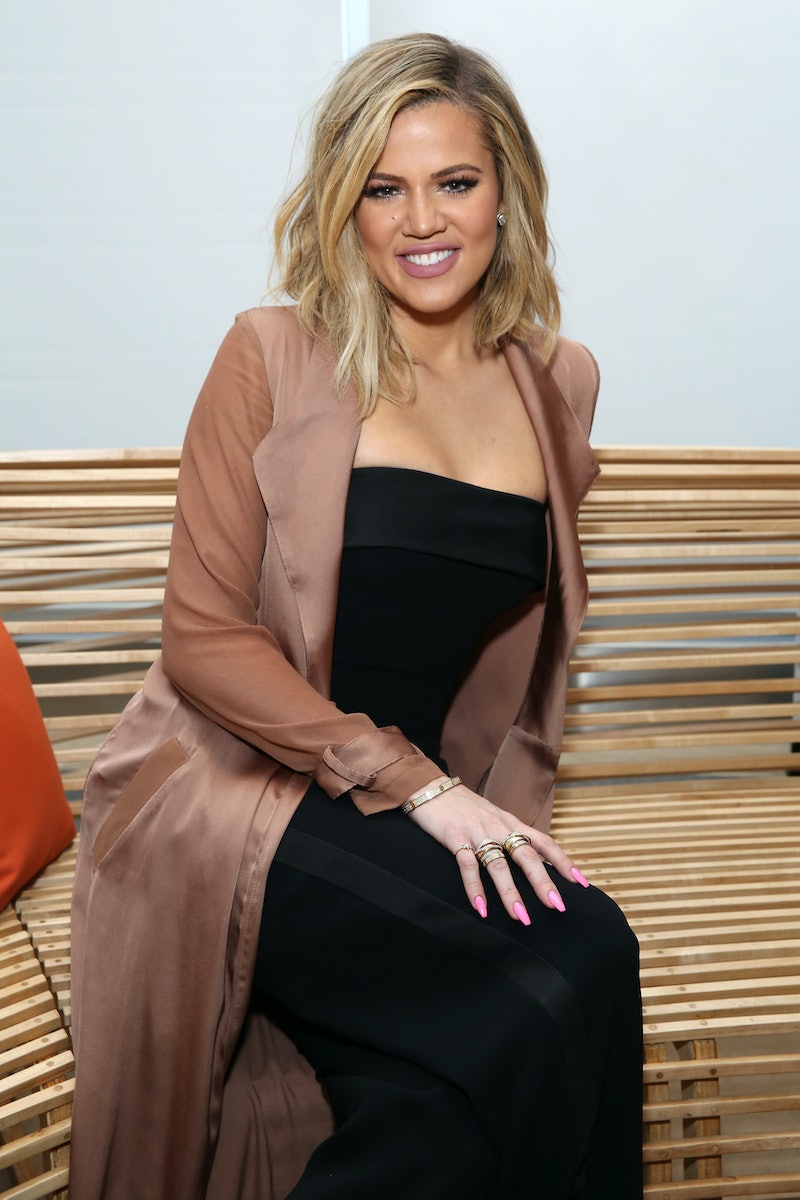 It's been over a year since Caitlyn Jenner sat down with Diane Sawyer to give the famous interview where she officially announced she was transgender, but that doesn't mean that it's now smooth sailing for Caitlyn and her family, and this week's episode of Keeping Up With The Kardashians is proof of that. On Sunday's Season 12 premiere, Caitlyn and Khloé Kardashian got into a fight after Khloé talked about Caitlyn's transition on The Howard Stern Show, and it definitely wasn't pretty. It was so bad that their fight prompted Khloé to say she she doesn't have a relationship with Caitlyn anymore, reducing poor Kris Jenner to tears. And if you caught the episode but didn't know about Khloé's interview last January during her book tour, you're probably wondering what Khloé said about Caitlyn on The Howard Stern Show . On KUWTK, she swore it was nothing bad, so was Caitlyn mad for no reason?

Looking back at the interview, it's understandable why Caitlyn is upset, but it does seem a little confusing why she was mad enough to send Khloé so many mean text messages. Like Khloé said on KUWTK, nothing she said was necessarily new or groundbreaking information, and it's not as if she was trying to speak for Caitlyn — it was more about how Caitlyn's transition affected Khloé and her life over the past year.

According to Entertainment Tonight, here's what Khloé said:

We felt betrayed because more business people [knew]. We felt so, like, what the f*ck? We've been asking you, and why do [business people] know? I never want someone to feel like they have a one-up on our family. We've never turned our backs on each, with all the cluster f*cks of sh*t in our lives, so why would we now? ... We didn't know when he was going to start dressing as Caitlyn and all of that. He didn't tell us any of that. I think he knew when, and it was frustrating. So yes, my reaction might have been harsh, but in any normal family, I would like to see your reaction.

She also addressed the fact that at first, Caitlyn would only talk about her transition on-camera, which is probably how she felt safest, but Khloé did acknowledge that it might not have been the easiest path for her and her siblings to receive the news. And when Caitlyn bashed Khloé for calling her "a liar" in Sunday's episode? That's probably because of this anecdote she told Stern:

When I was a teenager, I want to say like 13, I was in Bruce's closet for some reason, and I pulled a bag down and I found wigs and makeup and all this stuff and I told everyone what I [found]. I don't know why it was alarming to me. I can't remember if there was something else specific. I think I thought maybe Bruce was cheating ... I don't think they knew what to do — I don't even think my mom knew at the time. But everyone was like, "You're making it up." For some reason this event always stuck in my head, and now all the pieces are coming together.

I can definitely understand why Caitlyn would be upset, but I get Khloé's side of the story, too. Hopefully, this rift between them doesn't last. Kris is right, Caitlyn has been Khloé parent since she was a little kid. They need to work this out!