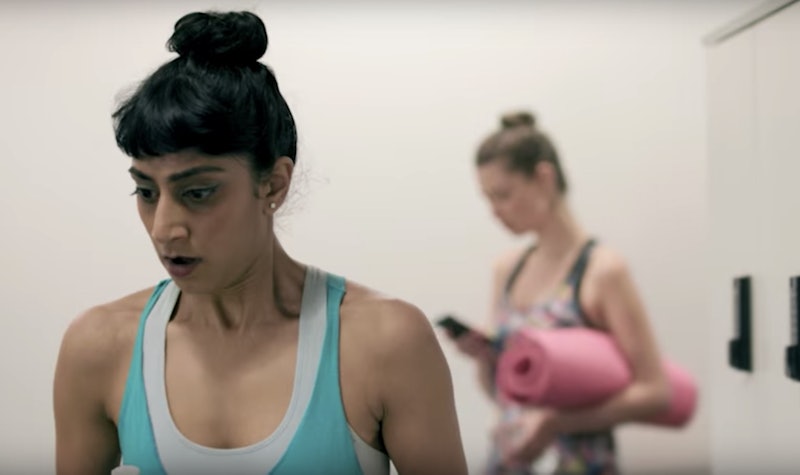 You may not necessarily miss your ex, but it can be hard not to be curious about his or her new girlfriend. Maybe you saw her photo pop up on Facebook or maybe someone else told you her name, but before you know it, she seems to be everywhere you go and it's starting to drive you more than a little crazy. We have all been there, and as highlighted in Elite Daily's "5 Stages Of Meeting Your Ex’s New Girlfriend For the First Time," it's definitely not a comfortable place to be.

As the video showcases, there are several painfully awkward phases leading up to the first time you meet your former flame's new love in person — from the first time you spot her at your neighborhood studio to the troubling realization that you both share a remarkably similar sense of style. When the moment of tut finally arrives, it is even tenser than anticipated, mostly because you don't know what to expect. Does she know that you used to date her boyfriend? Will she acknowledge it? Does it even matter?

The truth is, we have all found ourselves in that sort of anxiety-provoking social scenario at some point in our lives.

As Elite Daily's spot-on imagining points out, while it's definitely not fun to live through, it can often turn out much better than you might have expected. Below, check out the five (all-too-accurate) stages of meeting your ex’s new girlfriend.

It all starts with the first time you spy her while hanging with your best friend. Intrigued, you point her out and start sharing the sparse (and probably exaggerated) details you know about her. "Why do you care?" your wise (and currently much more level-headed) friend asks, calmly pointing out that the two of you probably have a lot in common. You did date the same guy, after all!

After that initial run-in, you start seeing her everywhere. While out shopping. At the bookstore. At the gym. How does this keep happening?! IS SHE FOLLOWING YOU?

As you relay these stalker-like "coincidences" to your best friend, she — lovingly — tries to snap you back to reality. But at that minute, who should walk up? Your other friend and his new co-worker who also happens to be — you guessed it — the new girlfriend! That's it. You've officially had it.

After your not-so-subtle reaction to her appearance, your friend urges you to stop acting so crazy. You try to regain your cool, but does she not see what's happening?!

Despite your best efforts to avoid it, you end up awkwardly engaged in a one-on-one conversation with the new girlfriend. She confirms that she knows who you are but before you can make a break for it, she also reveals that she and your ex are no longer dating. And yes, it's because of certain weird habits of his. You smile. This feels like the beginning of a beautiful friendship.