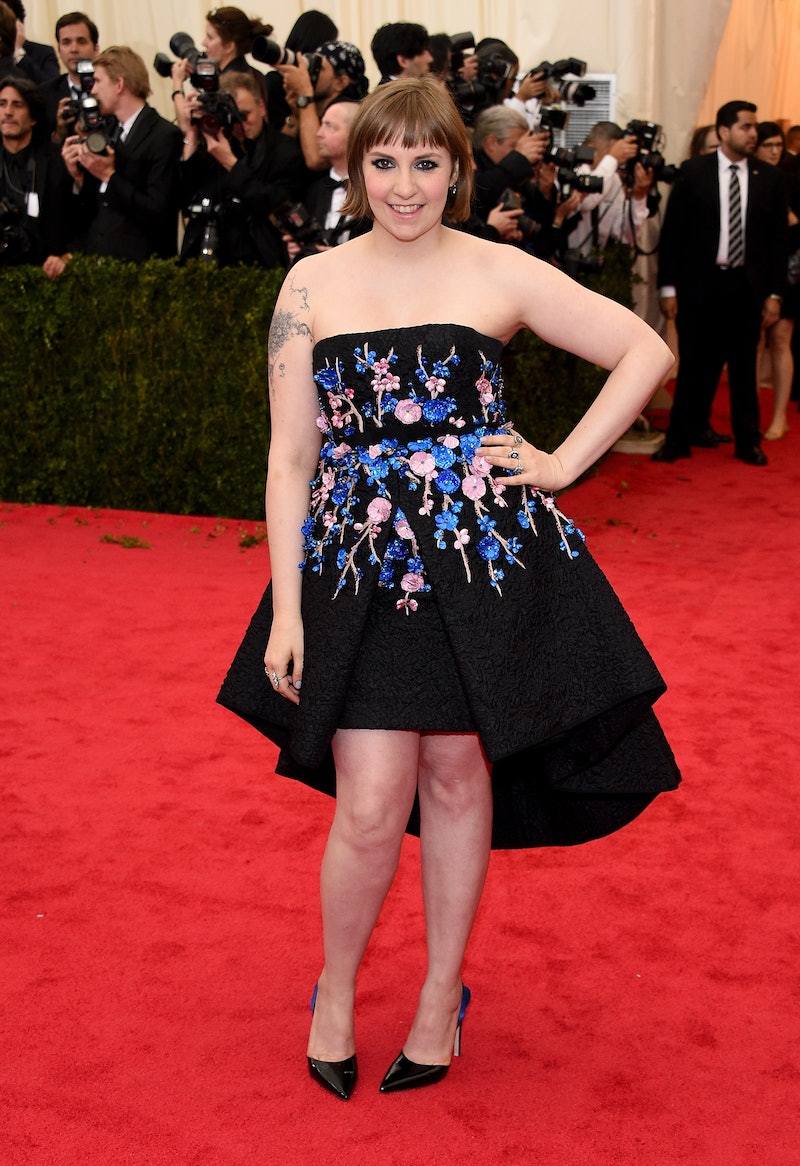 The Girls creator/star had quite the 2014 Met Ball — she wore Giambattista Valli, and it was one of her best dresses ever. I'm hoping she'll repeat her fashion glory, especially since her date's a bonafide fashionista — yep, Lena Dunham's Met Gala 2016 date is Jenna Lyons.

You might recognize Lyons for her 2014 stint on Girls, where she briefly played Hannah's hard-nosed (and ultra-stylish, of course) boss at GQ Magazine. She's president and creative director of J. Crew, and she met Dunham at a Glamour Women of the Year event a few years back, where they quickly struck up what Lyons referred to in The Cut as a "text friendship." The offer to appear on Girls (which Lyons accepted immediately and enthusiastically) came not long after that, and the two have been friends ever since.

Dunham revealed Lyons as her date for the evening via her epically-curated Instagram — she posted a pic of Lyons looking badass in an oversized shawl-collared coat, a Breton striped top and white high-waisted trousers, and the photo was accompanied with the caption, "coolest Met Gala date making some exec decisions." Does this mean that Lyons is helping to plan Lena's look? Or is she just making "exec decisions" about after parties? For the past year or so, Dunham has partnered with stylist Shirley Kurata for all things fashion, so it's probably the latter.

The news comes hot off of the heels of Dunham's friend Audrey Gelman's — AKA the real-life Marnie's — wedding, for which Jenna Lyons helped provide customized J. Crew skirts.

It's nice to see that Dunham and Lyons are still going strong following Lyons' guest spot for 2014 — plus, there's a very real chance that the two of them will absolutely crush this year's Manus x Machina theme.

At her last Met Gala, she stunned alongside Giambattista Valli — so here's hoping she does the same with Jenna Lyons!