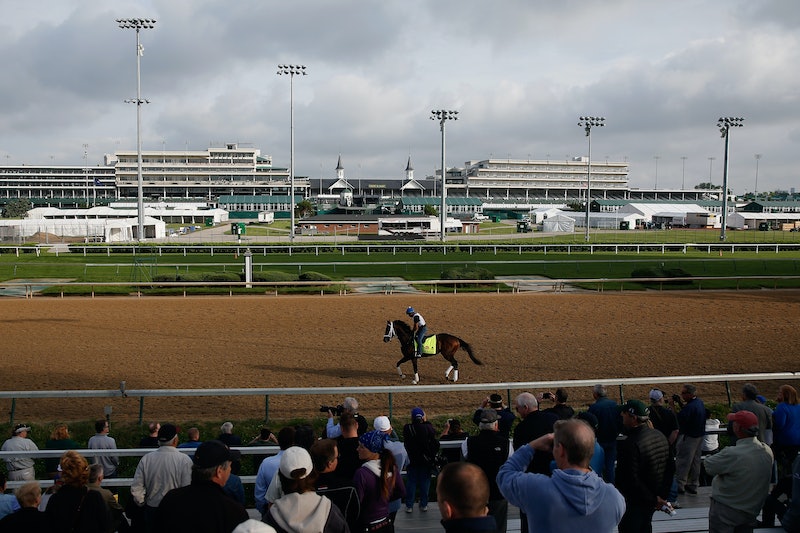 Departing America as quickly as it arrives each year is the Kentucky Derby, also known as the "most exciting two minutes in sports." This time around, the day is May 7, and fans of horse racing — and betting — around the nation are likely prepping their derby hats, mint juleps, and wagers for the big event. Although there are events scheduled for the entirety of Derby Week, including an already-past fun-filled opening night on April 30, the race day has a ton of its own events. So what is the Kentucky Derby event schedule for both viewers and attendees?

For those lucky enough to attend the derby live, there is plenty to do around the racetrack. First and foremost, for those who are interested in placing bets, the wagering windows open 30 minutes prior to the first race, which is at 10:00 a.m. — so that's 9:30 a.m. local time. For the Southern belles out there, the mint julep stands open at 8:00 a.m. local time (and the last call is 8:05 p.m., which allows for just over 12 hours of julep consumption). According to the schedule online, all kinds of partying are planned to occur inside the racetrack, as well as some celebrity-spotting, which will happen at the red carpet at Gate 10 from 12:00 p.m. to 2:00 p.m.

For the fans of horses and equestrian things, the contenders are in the Paddock 20 minutes prior to each race for each of the 14 races on Derby Day. This schedule will also prove helpful to the viewers who are simply attending to watch some horse do their thing.

This may sound a bit overwhelming to viewers from home, so to simplify the whole shebang: 12:00 p.m. to 4:00 p.m. Eastern Standard Time is the Kentucky Derby Undercard, which NBC will run live. For newer viewers, the undercard refers to the series of races that precede the 6:34 p.m. race. Finally, from 4:00 p.m. to 7:30 p.m. Eastern Standard Time, NBC will air the long-awaited Kentucky Derby 142 coverage.

Nothing is left but to sit back and enjoy! However, these times are very specific — as they are each year — so keep a close eye on the schedule.